Phil sees THE CONSPIRATOR and JANE EYRE at the Camera 7 Pruneyard-April 23, 2011

Today I decided to travel to another one of my favorite theaters, The Camera 7 in the Pruneyard Campbell. There I treated myself to a double feature. Two period pieces, but with two very different themes. One is based on true events, the other an adaptation of a literature classic.

There have been several stories in American history that have been omitted from history books as well as from the classroom. They are left out for several reasons, sometimes we are ashamed that these events unfolded here on our land. We try to cover up our mistakes with lies, deceit, denial, in hopes that these travesties will soon fade away. But the truth will never be buried for long, and in time, will become a part of history once again. Director Robert Redford brings one of these lost stories of American history to light with his new film THE CONSPIRATOR. 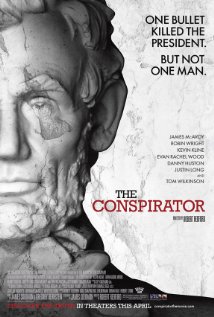 Based on true events that followed after the assignation of Abraham Lincoln, the film focuses on the trail of Mary Surratt, who ran a boarding house that John Wilkes Booth and others stayed at. She, along with a group of individuals, were charged with conspiring to kill the president. Her defense lawyer was 28 year old Fredrick Aiken, a decorated Union war hero, who becomes reluctantly chosen to represent Surratt. As the trial progresses, it becomes clear to Aiken that Mary is innocent and that she being set up by the War Commission to take the fall of her son, John Surratt.

This was a brilliant film that shines a light on one of the gravest mistrials in American History. James McAvoy's portrayal of Aiken was just amazing, bringing both integrity and determination to the role. Aiken, while prejudice against Surratt, thinking she is guilty, slowly overcomes these emotions as he realizes that she is to become the sacrificial lamb for the crimes that her son, as well as Booth's gang, have committed.  Of course Robin Wright's Mary Surratt is brilliant, commanding the screen with her incredible presence. The film also boasts note worthy performances by Evan Rachel Wood (Anna Surratt), Justin Long (Nicholas Baker), Alexis Bledel (Sarah Weston), Tom Wilkinson (Reverdy Johnson), and Kevin Kline (Edwin Stanton).

Director Redford handles James D. Soloman's script like a fine craftsman, taking his blueprint and creating a work of art that has class and intelligence. Redford slowly builds the tension in the courtroom until it reaches a fever pitch, until we, the audience, cannot stand to witness this travesty of injustice. We are being forced to watch a part of history that was recorded, but forgotten, and the repercussions of the bloodlust and revenge that the government demanded. Mary Surratt was hanged on July 17, 1865. She was the first woman to be executed by the United States government.

This was the debut film for The American Film Company, whose purpose is to make historically accurate films about America's past. And they have succeeded their mission with this film. With its combination of stellar performances, superb directing, and historical events, THE CONSPIRATOR has all the ingredients to become an Oscar contender for next year's awards show. Highly recommended for those who enjoy films based on historical events. 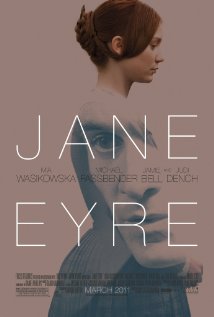 The next film I saw for today was a new adaptation of Charlotte Bronte's classic novel JANE EYRE. After living a bleak and despair childhood, Jane Eyre eventually becomes a governess at Thornfield Hall for the cold-hearted and mean spirited master Mr. Rochester. In time she begins to melt her master's heart, and soon the two of them fall in love. However, Mr. Rochester's secret past could very well destroy Jane's happiness and the life they planned together.

There have been several film adaptations of the novel. With this version, director Cary Fukunaga stays faithful to Bronte's novel while creating somber moods, self preservation, and forbidden love set against the tranquility landscape of the British countryside. What I also found interesting is that Fukunaga follows up his film debut SIN NOMBRE with this period piece, but somehow, he does a masterful job of directing this film. Slow paced and precise, with just amazing set ups, the film flows just like the novel, taking its time to introduce us all to Bronte's world.

Also it's worth noting the absolutely stunning performance of Aussie actress Mia Wasikowska in the title role as Jane. She is plain, strong willed, and determined to live her life on her terms without compromise. Wasikowska commands attention when she appears on screen. Actor Michael Fassbender's turns in another fine acting job as Mr. Rochester. While Orson Welles casts a very large shadow in the 1944 version, Fassbender does a tremendous job. My only real complaint is I wished that Judi Dench's role as the housekeeper was longer and more fleshed out. Dench is such a talented actress, and this role should've been much more richer. Other than that, this was a great film, and another contender for the Oscar's next year.

Both THE CONSPIRATOR and JANE EYRE are now playing nationwide, including at the Camera Cinemas. To see showtimes, visit http://www.cameracinemas.com/index.shtml

Thanks for reading, and enjoy the show!
Posted by Philip Castor at 6:33 PM