Phil gets invited to the Camera Cinema Club and sees THESE AMAZING SHADOWS-April 17, 2011

Life has a funny way of bringing you some good fortune. On the same day that I saw SCREAM 4, I was about to head home when I saw my good friend Nathan working the entrance of the Camera 12. I walked over to him and said hello, and just chatted with one another. Then he asked me, "Are you going to the Cinema Club screening right now?" I naively replied, "What's that?" He then led me back upstairs to Theater 11 on the third floor, and there I was introduced to a very special movie club. I thought I died and gone to heaven.

The Camera Cinema Club has been around for the past 14 seasons, and I can see why that is. The club's director Tim Sika chooses pre-released films that were the best at film festivals, and films that do not currently have a distributor. Before each screening, they have buffet table along with gourmet coffee and tea for everyone to enjoy. They also have trivia questions where the audience can win some very cool prizes. Yours truly won two DVDs. What's really amazing about the club is that the audience doesn't know what type of film will be shown, and the title is kept secret until the film starts. For this particular screening, the club showed a very interesting and entertaining documentary entitled THESE AMAZING SHADOWS. 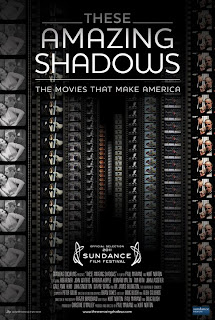 The film focuses on the history and importance of the National Film Registry, which was created by the Library of Congress to protect and to preserve our film heritage. The Registry has helped such diverse films as CASABLANCA, BAZING SADDLES, THE ROCKY HORROR PICTURE SHOW, CITIZEN KANE, STAR WARS, and THE WIZARD OF OZ to be deemed, "culturally, historically, or aesthetically significant," therefore important to be part of the Library of Congress. The film also spotlights how the Registry was created, how the films are picked, and how have these films influenced all of us in our everyday lives. With fantastic interviews with such directors as Rob Reiner, John Waters, Christopher Nolan, Wayne Wang; actors and actresses like Debbie Reynolds, Peter Coyote, Tim Roth, and Zooey Deschanell, film critic Leonard Maltin, the documentary brings forth the power of the movies and how it has transformed us all as well as the world.

After the screening, the film's directors Paul Marino and Kurt Norton came out to discuss the making of the documentary and conducted a very informative Q&A session with the audience. Afterwards I was able to introduce myself and had a great time talking to them about film. It's great to see that they had the same passion that I have and I thanked them for making such a fantastic film.

This was a great surprise for me! I couldn't believe that I got to participate in this event. I am truly honored and I can't wait for the next Camera Cinema Club event! This was the perfect way to end my weekend, which consisted of seeing seven films! Yup, this was just what I needed after being sick all last week.

To learn more about the film THESE AMAZING SHADOWS and where it will be showing, visit their website at http://www.theseamazingshadows.com/index.html

Thanks for reading, and enjoy the show!
Posted by Philip Castor at 10:13 PM