As some of you may already know (or have noticed in my ramblings in other film blogs), I love horror films. Absolutely love them! There's nothing more fun than watching a horror film and just being scared to death. What can I say, horror is in my blood. I cannot begin to list just how many I've seen throughout my lifetime, but it's a lot! However, within the past decade, we have seen a plethora of horror films being remade or reimagined, mostly with subpar results. Sometimes we get a decent remake (DAWN OF THE DEAD, THE TEXAS CHAINSAW MASSACRE to name a very select few), and some sequels are very good (HOSTEL 2, SAW 2-4 as examples), but overall the genre is starting to become a cliche of its own self. And nobody knows this better than Wes Craven, who returns to the horror genre with yet another sequel, SCREAM 4. But this time, the sequel is actually pretty good. 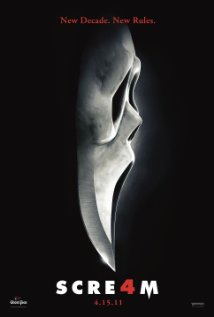 It's been ten years since we've seen Sidney Prescott (Neve Campbell), who is now an author of a best-selling self-help book. She returns to her hometown of Woodsboro on her last stop of her book tour, where she reconnects with her old friends Sheriff Dewey (David Arquette) and Gale (Courtney Cox), who are now married and living the quite life. She also visits her Aunt Kate (Mary McDonnell) and cousin Jill (Emma Roberts). But things go awry once again as the mysterious Ghostface killer returns creating havoc on the town. Sidney must confront her past once more while (with the help of Dewey, Gale, and Jill) solving the identity of the new Ghostface, before anymore blood shed can be spilled.

Director Craven again teams up with screenwriter Kevin Williamson to bring together some old familiar faces, while introducing some new ones: Marley Shelton, Hayden Panettiere, Rory Culkin, Adam Brody, and the for mentioned Roberts all turn in some fine performances. Williamson's script is top notch, while expanding the SCREAM universe by acknowledging the recent trend of horror remakes and sequels, and incorporating new technologies that have been introduced; such as a cool iPhone application that turns your voice into that of Ghostface. It's little details such as these that helps bring the franchise into the new decade.

Of course Craven's directing is fantastic as always, and it's good seeing him return with a good movie, unlike his last film MY SOUL TO TAKE, which was one of the biggest horror flops from last year. I think that film would have benefited greatly by having Williamson co-write the script with Craven. Alas, we can only dream about that.

While the film focuses more on having a good time rather than scaring you, SCREAM 4 does prove that you can go back home again, and manages to pull off the unexpected. Here is a sequel that is an entertaining film that, what I believe, is the best entry of the series since the first film. If you want to see how the series continues, by all means go see this film. Just try not to get killed on the way to the theatre.

SCREAM 4 is now playing nationwide, including at the Camera CInemas. To view showtimes, visit http://www.cameracinemas.com/index.shtml

Thanks for reading, and enjoy the show!
Posted by Philip Castor at 5:55 PM