Phil sees THE SAPPHIRES at the Camera 7 Pruneyard Campbell-April 6, 2013

Hello again everybody! This past weekend I decided to go on one of my massive movie binges! I get like this from time to time so just bare with me. Now the first film I saw on Saturday was a film that I had the privilege of seeing last month during the Cinequest Film Festival. The film is called THE SAPPHIRES and it's still a fun film to watch a second time around! 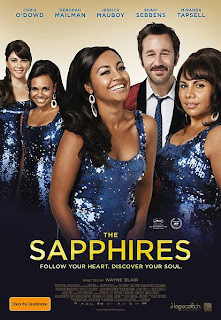 So here's what I said in my original review of the film: "Directed by Wayne Blair and set mostly in Australia, the movie is about four Aboriginal girls who get a chance at the end of the Sixties to go entertain the troops as a singing group in Vietnam. Managing them is down and out musician Dave (played by Chris O'Dowd from BRIDSMAIDS). Things go great for the girls, however once they arrive in Vietnam, they all experience love and witness the horrors of war."

"Adapted from the stage play written by writer/actor Tony Briggs, the film is inspired by the true story about four extraordinary Aboriginal women; sisters Laurel Robinson, Lois Peeler and their cousins Beverley Briggs and Naomi Mayers. Blair actually starred in the stage production, which made him the obvious choice for directing the film version. All four actresses are fantastic in the film, bring so much humor and attitude. Words cannot express just how mush I enjoyed this film! With it colorful and funny characters, a solid script, great directing and acting, the film was a very welcomed surprise!"

So what do I think now after seeing it a second time? Exactly the same thing as I wrote about the first time! It has a great soundtrack, a lot of humor, some drama to make it interesting, and of course, fun and interesting characters. Chris O'Dowd is hilarious as the down and out wanna be musician Dave. Also Deborah Mailman (Gail), Jessica Mauboy (Julie), Shari Sebbens (Kay) and Miranda Tapsell (Cynthia) are just fantastic in their respective roles!

So THE SAPPHIRES is this spring's go-to-film to escape all the craziness that's been going on in the world. Sometimes we just need to escape from it all. If you feel like this, then go see this film. It will definitely will put you in better spirits! 4 out of 5 stars! Recommended!


THE SAPPHIRES is currently playing in theaters nationwide, including at the Camera Cinemas here in the Bay Area. To view showtimes, visit their website at www.cameracinemas.com.

Thanks for reading, and enjoy the show!
Posted by Philip Castor at 9:38 PM