For Screamfest's third and final film of the night, they screened one of the most talked about films of the past year! A film that has won critical and numerous awards from several respected film festivals from all around the world. The film won five awards at last year's Screamfest alone! In 2009, filmmakers and twin sisters Jen and Sylvia Soska (aka the Twisted Twins) unleashed upon the world their debut film DEAD HOOKER IN A TRUNK, a beautiful and gore-soaked homage to exploitation films. Now the Soska Sisters return with their latest cinematic endeavour entitled AMERICAN MARY. 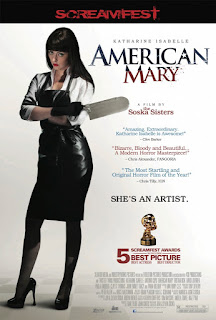 Mary Mason (Katharine Isabelle) is a medical student, who dreams of becoming a surgeon once she's done with school. However things are not going well for Mary; she's in severe debt, has bill collectors calling her, and one of her professors keeps demeaning her in front of the class. All this pressure and stress thrusts Mary into applying for work at a strip club just to pay the bills. However club owner Billy Barker (Antonio Cupo) has another job in mind for her: save the life of a bloodied and tortured man and receive $5000 cash. This one event sets off a chain reaction that engulfs Mary into the underground world of surgeries that she dubs "Body Modifications," which proves to be very lucrative trade for the former starving med student.

Miss Isabelle's acting is simply captivating; one has to see her in the film to believe just how incredible she is! Riveting, stunning, and outstanding; she just radiates up on the big screen! Her ability to convey a wide array of emotions is marvelous. One moment we are sympathetic for her, the next we are shocked to see her go completely insane. Now if you think that Katharine Isabelle looks familiar, there's a very good reason for that. She is most famous for starring as Ginger in the beloved GINGER SNAPS Trilogy. In 2003, she broke into the American mainstream portraying Gibb in the major Hollywood horror blockbuster FREDDY VS. JASON. With this film, Katharine proves without a shadow of a doubt that she belongs in the world of the Hollywood elite! She's that goddamn talented and that goddamn good!

The film also shows off the maturity of the Soska Sisters, which is far and away a major step forward in their evolution as writers and directors. While their first film utilized the standard hand-held style of directing (which is very common in the low budget indie film world), AMERICAN MARY enjoys of having a bigger budget, which enabled the Twisted Twins to really stretch out as directors and prove what they are capable of doing. From a technical standpoint, the film is just marvelous: beautiful sets, smooth and precise directing, top notch production values, exquisite lighting, and awesome editing. Sylvia and Jen have time to really hone their skills on the film, proving that they are more than just a one trick pony and the end results are a just incredible! Writers, actresses, directors; these ladies prove that they are a force to be reckoned with!

As I previously mentioned, the film won five Screamfest awards last year, including best Best Actress, Best Director, and Best Picture. It's played at prestigious film festivals all across the globe such as Toronto After Dark, Shudderfest, and Fantastic Fest. It has also received critical acclaim from numerous media outlets, including Fangoria, FEARnet, and Ain't-It-Cool News. The film was distributed by Universal UK overseas and it will be hitting American shelves on both Blu-Ray and DVD on June 18th.

AMERICAN MARY ranks as one of the best modern horror films of the past 20 years! In an age where Hollywood is cranking out endless remakes that lack integrity and intelligence, Jen, Sylvia, and Katharine have contributed to the horror genre a cinematic feminist fright film that has it all! It's beautiful and yet tragic, funny and subversive, insightful and bloody, this is a film that we need now more than ever! Let this be a wake up call to all other aspiring female filmmakers; get out there and make your movies because I can't wait to see them! And I can't wait to see what the Soska Sisters do next! 5 out of 5 stars!! Highly recommended!!


AMERICAN MARY will be available on Blu-Ray and DVD on June 18, 2013. To pre-order a copy, visit the Amazon website at www.amazon.com or visit your local retailer once it's released. Also follow the film on Facebook and Twitter.

Thanks for reading, and enjoy the show!
Posted by Philip Castor at 10:02 PM