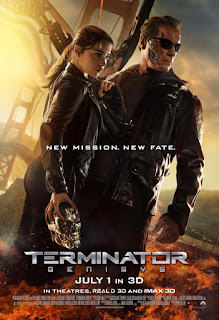 When director James Cameron made the first TERMINATOR back in 1984, all it was really was a little low budget B-Movie that did a lot better than it was supposed to at the box office and it went on to become a sci-fi classic. In 1991, TERMINATOR 2: JUDGEMENT DAY was released and the bar was set very, very high after that. The film completely changed the landscape of what not only a sequel could be but how movies could be made. Then Cameron left his series to make TITANIC and AVATAR so he could win a shitload of awards for them (which he did). As a result, the following two sequels TERMINATOR 3: RISE OF THE MACHINES and TERMINATOR: SALVATION sucked hard. Seriously, they really did suck that bad. They were somewhat entertaining, but you could tell they were soulless Hollywood sequel creations whose only purpose for making them was to try to squeeze every last dollar out of their dying franchise so that fans of the series would shell out their hard earn cash to see them (which I did unfortunately. Hey, I'm a film buff. That's what I do). Then there was the short lived television series (which wasn't too bad of a show by the way) but it seemed like Skynet was finally shut down. Then out of nowhere, Paramount Pictures along with Skydance Productions announced that they had obtained the rights to the series and were planning on relaunching the franchise with a new trilogy of movies. The first installment of this trilogy is TERMINATOR: GENISYS which I finally got around to seeing. 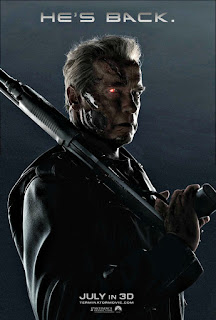 The film's official synopsis:When John Connor (Jason Clarke), leader of the human resistance, sends Sgt. Kyle Reese (Jai Courtney) back to 1984 to protect Sarah Connor (Emilia Clarke) and safeguard the future, an unexpected turn of events creates a fractured timeline. Now, Sgt. Reese finds himself in a new and unfamiliar version of the past, where he is faced with unlikely allies, including the Guardian (Arnold Schwarzenegger), dangerous new enemies, and an unexpected new mission: To reset the future.

Now the film has been receiving a lot of negative reviews from critics and from fans of the franchise. Some said the plot was too confusing and not structured correctly, some didn't like the acting, while others thought it just sucked ass. Here are some of the complaints that I had with the movie:

So let's start with the acting first. It's not that great. Hey, I'm being honest. You know it's bad if Arnold Schwarzenegger is the best actor out of the bunch. Yes, I know people love Emilia Clarke because she's on Game of Thrones and she's a decent actress but she's no Linda Hamilton. As for Jai Courtney, can someone please me why the hell is he still getting work? After seeing him in the two DIVERGENT films, I guess he's the new flavor in Tinseltown. But just like Clarke, he had some big shoes to fill and he came nowhere close to being Michael Biehn. And why is J.K. Simmons wasting his time and talent making this film? Plus I was really excited to see Matt Smith (aka the Twelfth Doctor from Doctor Who) making his big screen American film debut and he's on screen for about two minutes!! WTF?!? Come on people he was Doctor Who for crying out loud!! He's a really talented actor and you only use him at the beginning and the very end of the movie?!? Why did you cast him in this film if you were not going to use him properly?!? Bloody freaking hell!! You people are freaking morons!! 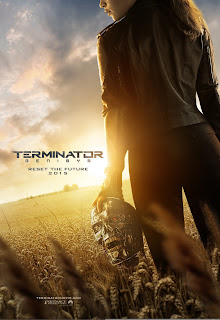 Director Alan Taylor helmed the 2013 Marvel film THOR: THE DARK WORLD. Here, he's trying to replicate his summer blockbuster, big screen debut with this follow-up to a dead franchise. And he tries so hard to make it work, but it's rather difficult to make a good movie when the script has you all over the damn place. Screenwriters Laeta Kalogridis and Patrick Lussier were trying to write a great screenplay, but it's a convoluted mess. First the trailers gave away the big plot twist! Spoilers!! Then where in the future of 2029, then we're back in 1984 LA. Then we're flung to 2017 San Francisco. I'm sorry but I thought the whole Terminator Universe took place in Los Angeles. I mean, that's where Skynet was born, where Sarah and Reese meet, fall in love, bonked and stuff. It's where all the other films take place. Why change the locations?

Speaking of locations, has anyone else notice that San Francisco is now the new city for absolute annihilation, carnage and out of this world destruction? It's been ground zero in recent films like X-MEN 3, GODZILLA, STAR TREK INTO DARKNESS, SAN ANDRES, and RISE OF THE PLANET OF THE APES. Looks like our City by the Bay is the new LA for today's films! Way to go NorCal!!

Now after hearing me gripe about the movie I have a confession to make. And here is it: I really enjoyed the film. Crazy, right? Reason I liked it was because I liked how it took its own timeline and completely blew it all to shit and started over again. That was smart of the filmmakers. That's how you reboot a franchise these days. Blow up your continuity to hell in a hand basket and start fresh. It worked for the STAR TREK franchise, so why not for the TERMINATOR series?!?

For you old school fans of the series, it works on a nostalgic level. The first half hour replays some of your favorite moments and scenes from both the first two films to, so as to get you invested in the story and with the characters. Then there's a curveball thrown at us: holy crap the timeline is all messed up!! There's two Arnold Terminators in 1984? The T-1000 liquid metal Terminator is there too? And it's not Robert Patrick but it's Byung-hun Lee from the G.I. JOE movies? And Sarah Connor is a bad ass already? And it's like this for the rest of the film and you can't look away from it. Like a car wreak, it's grotesquely fascinating!

So in conclusion, TERMINATOR: GENISYS is one of the best movies you'll love to bitch about! In all honesty, it's so bad it's good! I loved this stupid film! And it really is stupid. But I can promise you all out there that you will be entertained! 4 out of 5 stars! Definitely worth watching!!


TERMINATOR: GENISYS is now available on both Blu-Ray and DVD at your local retailer. You can also order the movie on Video On Demand, Digital Download as well as at your local Redbox.

Thanks for reading, and enjoy the show!
Posted by Philip Castor at 8:11 PM