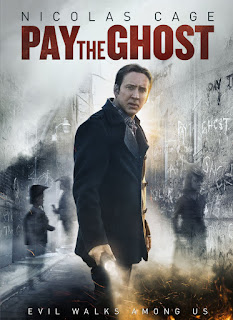 Have you noticed that actor Nicolas Cage has been in a lot of movies lately? Seriously, there's been a shitload of movies starring the man. Since 2010, he has appeared in a total of 18 movies!! Holy crap that's a lot of movies! But let's be realistic about this for a moment. A majority of those either sucked ass or went straight to video. Now the film I'll be reviewing today falls in the later category. However, I must admit that I rather enjoyed PAY THE GHOST, which also stars actress Sarah Wayne Callies from AMC's The Walking Dead and USA Network's new hit sci-fi series Colony.

The film's official synopsis: One year after Mike Lawford's (Cage) young son (Jack Fulton) disappeared during a Halloween carnival, he is haunted by eerie images and terrifying messages he can't explain. Together with his estranged wife Kristen (Callies), he will stop at nothing to unravel the mystery and find their son-and, in doing so, he unearths a legend that refuses to remain buried in the past.

This is one of Cage's better straight-to-video movies. What I liked about it was that it was a pretty creepy supernatural thriller that also plays on every parents' worse nightmare: your child goes missing. Nothing is more horrifying than not knowing what has happened to your children. Here, Cage becomes completely obsessed with finding his son and doesn't let one day go by without him putting flyers and visiting his local police district office. But because his son disappeared while under his supervision, his wife blames him and now their marriage is crumbling down, to the point that they live apart. Cage's performance is always a little over-the-top, but here he's much more in control and is more authentic. We the audience feel his loss, his frustration with the local authorities, his depression and, of course,  his fear when he begins to discover that there might something more sinister that's involved. Of course, Callies' acting is fantastic as always. You just believe her performance and she nails the emotional roller coaster her character Kristen goes through during the film. She's is simply an amazing actress.

German born director Uli Edel has made cult classic films like LAST EXIT TO BROOKLYN, BODY OF EVIDENCE and THE BAADER MEINHON COMPLEX. He's also made several made-for-television movies like Confessions of a Sorority Girl, Tyson, Rasputin and EVIL NEVER DIES. He's also directed episodes for Oz, Tales from the Crypt, Homicide: Life on the Street, and the mini series Houdini for the History Channel. Here, Edel dies a fine job of creating tension and chills and being able to keep the movie going forward at a decent pace with solid set-ups, close ups and

After the movie was made back in 2014, it was finally picked up for distribution by RLJ Entertainment and gave the film a very small limited theatrical release in the fall of 2015. It was also released simultaneously on video on demand.

Overall PAY THE GHOST is a decent supernatural albeit predictable thrillet. But it does hold your interest with its decent story, solid acting and above average scares. If you're a hardcore Nicholas Cahe fan, then this will be right up your alley. 3 out of 5 stars! Worth the rental!


PAY THE GHOST is currently available on DVD at your local retailer. It's also available at selected Redbox kiosks and on Video On Demand.

Thanks for reading, and enjoy the show!
Posted by Philip Castor at 5:31 AM