Phil attends a special screening of STREETS OF VENGEANCE at the Shire Community Space in Modesto - October 22, 2016

If you've been following my blog for all these years then you know that I'm a huge supporter of local independent filmmaking. A&P Productions is an independent film production company based out in Modesto, California. Founded by power couple Paul Ragsdale and Angelica De Alba, they make their films the old fashioned way; meaning they write, shoot, edit, produce and direct all themselves which is wonderfully inspiring. They're latest film caught my attention a couple of months ago and I knew that I had to review it. Lucky for me, they were having a special screening of the film at The Shire Community Space in Modesto. Taking inspiration from films like SAVAGE STREETS, ANGEL and ALLEY CATS with the late night format of USA's Up All Night, STREETS OF VENGEANCE is a perfect blend of 80's homage and local DIY filmmaking! 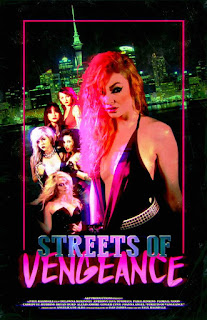 The film's official synopsis: Former adult film star Mila (Delawna McKinney) is attacked by a misogynistic cult known as The Sword. She turns vigilante and puts a group of bad-ass girls together and seeks revenge.

Since the release of GRINDHOUSE back in 2007, there have a plethora of retro styled horror and exploitation films that have been amazing. These releases include HOUSE OF THE DEVIL (2009), HOBO WITH A SHOTGUN (2011), THE SLEEPER (2011), THE FINAL GIRLS (2015), WE ARE STILL HERE (2015) and the movies from Canada's Astron 6: FATHER'S DAY (2011), MANBORG (2011) and THE EDITOR (2014). Here, director Ragsdale continues this trend but adds some new ingredients into the mix. While it feels and sounds like your classic 1980's revenge action movie, it looks like a like a modern day film. There's modern day cars, cellphones, computers and other forms of technology that reminds viewers that the film takes place in today's world of San Francisco. But, by having the grittiness of those films that inspire it and the totally awesome 80's synth soundtrack courtesy of Vestron Vulture, it takes you back to those crazy fun-filled days of Reganomics era America.

Ragsdale's directing is fantastic; providing that perfect balance between action and drama. His set-ups and compositions are incredible, creating some very iconic scenes that would make excellent lobby cards (hint hint Paul). He is able to tell a very compelling story (which he wrote as well) with complex and often hilarious characters and grotesque villains while offering the audience some cool action and gory death scenes. Credit also goes to cinematographer Dan Zampa who does an outstanding job of capturing it all. His visuals are sharp, clean and his lighting is very reminiscent of those found in Dario Argento's films like SUSPIRIA, DEEP RED and PHENOMENON. Truly a very talented cameraman and photographer.

As for the cast, I have nothing but absolute praise for them! Standouts for me include lead actress Delawna McKinney as our protagonist Mila, who shines bright as our heroine. She brings naïveté, vulnerability as well as strength, determination and guts! Paige Jenkins as Amber is sweet, kind and a loyal friend to Mila (she also did the special effects for the insanely sickening "Penis Scene" which was absolutely freaking impressive). Cassidy Irwin's Liv had the best one-liners in the film! She was hysterical and badass as well and I loved it when she appeared on-screen. Brian, played by Anthony lava To'omata proves that the average joe can become a hero and get to kiss the girl. Awesome job by this great actor. 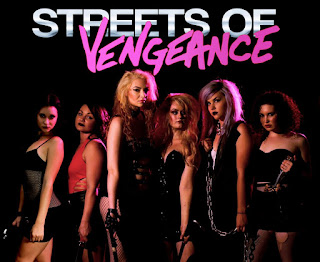 Now you can't have a good movie without some bad guys and this film has the luxury of having not one, but two evil antagonists. While I won't mention their names due to revealing spoilers, but my hat goes off to both of them for their performances. These two are the most diabolical, disgusting, and deplorable human beings to ever appear in a movie. Seriously, these guys are just plain evil and I loved hating them while I was watching the movie. Like I said, I can't mention them due to ruining the plot revelations, but again, tremendous job fellas.

Another interesting fact is that the movie also features cameos from some of today's most popular adult film stars. So look for Alexis Amore and Sophie Dee in one scene together. Also having a small part in the film is Joann Angel, founder of Burning Angel Studio. Angel plays Nina, who is the catalyst for one of our antagonist going batshit crazy. The other actress to appear in the movie is the adult film icon Ginger Lynn Allen as Roxy Carmichael. I loved Ginger in her role and I am very happy and excited to see her being used properly and to see her acting in a film! I'm sorry but Rob Zombie's use of her in both THE DEVIL'S REJECTS and his latest project 31 is appalling. She is a legend, she is a gifted actress, and she is talented! She's completely wasted in those films. Here, she gets to show off her range as an actress and have real dialogue. I applaud Ragsdale for giving her the opportunity to display her acting capability. A great performance by this living legend!

I mentioned earlier that Ragsdale wrote the film's screenplay, which has a strong feminist message within the dialogue. Women have the right to do what they want with their bodies and shouldn't be slammed with vulgar displays of discrimination. Body shaming, name calling and misogyny are not tolerated. I am a big supporter of women's rights and if they wish to work in the sex industry or make adult films or whatever, then that's their right. Despite its over-the-top violence, gore and bloodshed, the movie acts as a reminder for all women to be and feel empowered and ignore society's so-called and outdated "standards" on what and how a woman should be and act like. It's their lives and their choices people, so if you don't like it, well, tough shit. Get over it!

After the screening, they had DVDs of the movie for sale as well as three different type posters. Of course, I went TOTAL fanboy and bought it all. I then had the cast and crew autograph everything plus made some new friends as well. This was my first real movie event that I've attended in a long time and overall, I had a total blast at the screening!

STREETS OF VENGEANCE is my favorite underground independent film of 2016!! It's only a matter of time before the film takes over the world! Till then, I'm gonna watch my DVD copy over and over again! Also, keep your eyes peeled here because in the very near future, I will be conducting interviews with several members of the cast and crew! If you see this film playing in a town near you, I would strongly suggest you see this movie!! 5 out of 5 stars!! Very highly recommended!!


STREETS OF VENGEANCE will be soon be screening at film festivals throughout the country. In the meantime, you can follow the movie on Facebook and checkout it's IMDb page and look for A&P Productions on Instagram.

Thanks for reading, and enjoy the show!
Posted by Philip Castor at 4:50 PM