Filmmaker Tim Burton has had one of the most interesting careers in Hollywood. His unique vision has brought some of the most beloved, iconic and original films to the silver screen. PEE-WEE'S BIG ADVENTURE, EDWARD SCISSORHANDS, BEATLEJUICE, SLEEPY HOLLOW, BIG FISH and SWEENEY TODD: THE DEMON BARBER FROM FLEET STREET have all garnered worldwide acclaim, cult like fandom and huge boxoffice returns. He's delved into the world of comic books with both the highly successful BATMAN and the equally successful sequel BATMAN RETURNS. His stop-motion films CORPSE BRIDE, FRANKENWEENIE and A NIGHTMARE BEFORE CHRISTMAS have become unique children classics. But, he's also made some notable bombs such as PLANET OF THE APES, CHARLIE AND THE CHOCOLATE FACTORY, MARS ATTACKS!, DARK SHADOWS and ED WOOD (which is a personal favorite of mine). All this brings me to his latest project MISS PEREGRINE'S HOME FOR PECULIAR CHILDREN, based on author Ransom Riggs's 2011 novel of the same name. 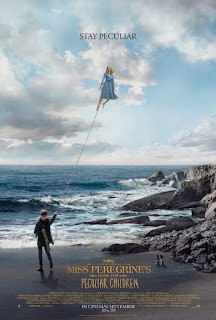 The film's official synopsis: When Jacob (Asa Butterfield) discovers clues to a mystery that stretches across time, he finds Miss Peregrine' Home for Peculiar Children. But the danger deepens after he gets to know the residents and learns about their special powers.

I found the movie interesting to watch, but it didn't really contain hardly any of Burton's trademark weirdness. The only real thing that I found somewhat Burton-esque was the evil monsters that plague Jacob and the other Peculiars. His directing style has become more polished and more mainstream looking. There's not a lot of sweeping shots of cities or gothic looking locations, nor crazy camera pans and such. It's a lot of basic set-ups and shots. Nothing that looks out of the ordinary, which to me isn't Tim Burton. He's an artists in the most purest way; he writes, he draws, he paints, he directs, he's really a talented individual. But somewhere along during his journey throughout Hollywoodland, he seems as if he lost his way. This, of course, is only my opinion but he was a better filmmaker when he was more eccentric and goth. Not that the movie was bad, but it just didn't look and feel like a Tim Burton movie.

Asa Butterfield was good in the role of Jacob, bringing some layering and personality to his performance. However let's be honest, Eva Green just steals the whole movie.  She just radiates when she's on the screen: her speech, her mannerisms, her intelligence, her body language, she is just a joy to watch. She is so damn talented that she could read me the Yellow Pages and I would be hooked! Plus she's a very attractive and sexy woman that you cannot take your eyes off of her when she walks into a scene! Lastly, Samuel L. Jackson as our main antagonist Baron. Seriously, he's having a lot of fun in this movie. He's the MAN folks! 'Nuff said!!

As I mentioned earlier, the movie is based on the young adult novel by Ransom Riggs. The book was published by Quirk Books on June 7, 2011. It went on to become a New York Times bestseller and reached the Number 1 spot in April of 2012. The sequel "Hollow City" was published in 2014, while the third chapter of the series "Library of Souls" was released in September of 2015. As to whether Burton will direct the other two adaptations is still unknown.

So to wrap this review up, MISS PEREGRINE'S HOME FOR PECULIAR CHILDREN is an entertaining movie, but it's not Tim Burton's best work. I sincerely hope that one day he returns to his cinematic roots and craft a film that truly represents his voice, his vision and his eclectic personality. If your children really want to see the movie, then by all means take them. Nothing wrong with a family night out to the movies. 3 out of 5 stars! It's mediocre at best!


MISS PEREGRINE'S HOME FOR PECULIAR CHILDREN is currently playing at theaters nationwide. Check your local listings to see if it is playing in at a theater near you.

Thanks for reading, and enjoy the show!
Posted by Philip Castor at 11:57 AM