Hello again my friends. I thought it would be fun if I posted my recent review that I did for the Fangoria website. Just in case you've never heard of it, Fangoria is a monthly horror magazine that covers and reports everything horror related. From films to comic books to music and novels, Fangoria has been around since 1979. On their website they have up to the minute horror news, and yours truly gets to review films and DVDs for them. However, with every one good film, I see a lot of bad ones, and this month's was no exception! 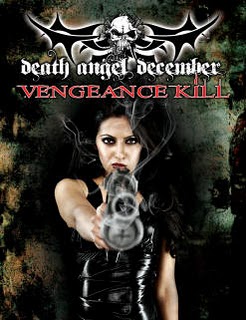 Now as you may or may not know, I love movies, especially horror and exploitation films. Within the exploitation genre, there are numerous subgeneres: nunsploitation, sexploitation, nudie cuties, the roughies, and the ever popular revenge genre. Classic films such as MS. 45, I SPIT ON YOUR GRAVE, and THEY CALL HER ONE EYE are perfect examples of this and have influenced many Hollywood directors as well as indie filmmakers as well. Some pay tribute to these films (look no further than recent releases like GRINDHOUSE, MACHETE, and HOBO WITH A SHOTGUN), which leads me to DEATH ANGEL DECEMBER: VENGEANCE KILL, the newest release by Chemical Burn Entertainment.  While the story synopsis sounded promising, the actual execution of the film is a total and utter let down.

The story itself is simple enough, and it's a story that has been told numerous times. As a young child December witnessed the rape and brutal murder of her mother and her younger brother. Throughout her young adult life she tried to bury her inner turmoil, until she herself is raped by her boyfriend. After learning the fundamentals of self defense and firearms, she stalks the streets at night and dishes out her bloody brand of vigilante justice. Years later, the men responsible for her family's death resurfaces. She stalks and kills them one by one, leading up to an orgy of mayhem, carnage, and  death. It is a fitting and blood soaked finale to the death.

Like I said, it's a simple story but the execution of it was just atrocious. The cinematography looked like it was shot on someone's cellphone. The entire soundtrack was muffled and unlistenable and it was painfully obvious that the sound crew didn't have a boom mic. For some strange reason, almost every other scene ended with a freeze frame image, which I found very annoying. Lightning was non-existent throughout the film. The story was all over the place, with the backstory told in both black and white and in color. I was so confused during parts of the film because I didn't know what was real time or a flashback sequence. And last but not least, the acting was just about one notch above a high school drama club play. None of the actors brought any kind of depth to their respective characters, nor did I care about our heroine. We are supposed to sympathize with her for her loss and cheer for her when she takes out her revenge. Unfortunately those emotions where nowhere to be found.

DEATH ANGEL DECEMBER: VENGEANCE KILL is just plain awful, a sorry excuse for an exploitation/revenge film. Filled with bad acting, low production values, inept dialogue, and an abysmal script, the film makes PLAN 9 FROM OUTER SPACE look like CITIZEN KANE. Sometimes when I find myself watch a really bad movie, I'm reminded a joke from my favorite TV show MYSTERY SCIENCE THEATER 3000, which goes something like this, "In the future, can there be a law that says that films have to be made by filmmakers?" After watching this film, I whole-heartedly concur with that statement.

Thanks for reading, and enjoy the show!
Posted by Philip Castor at 5:16 PM