Phil attends a special early screening of TRANSFORMERS: DARK OF THE MOON in 3-D at the Camera 7 Pruneyard-June 28, 2011

Well I thought today would be your usual lazy Tuesday evening. It's pouring rain outside, I'm tired from work, I wasn't planning on seeing a movie tonight. But just out of curiosity, I went to the Camera Cinemas' website and saw that they were having a special early screening of TRANSFORMERS: DARK OF THE MOON at 9:30pm! And it was 8:57pm! So I changed my clothes, charged down the stairs, leaped into my car, and drove down to the Camera 7 Pruneyard in Campbell to see the third and final installment of the series. 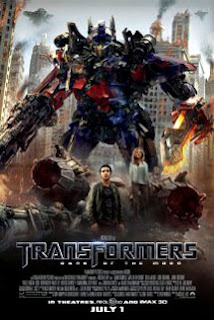 Much has changed in the years since we've last seen our hero Sam Witwicky (Shia LeBeouf). He was dumped by his last girlfriend Megan Fox (who was replaced by a much more beautiful woman, more on that in a sec), he received a medal from President Obama for saving the world, graduated from an Ivy League college, and now lives with his ultra hot, ultra sexy, and ultra delicious looking new girlfriend Carly (Victoria's Secret Model Rosie Hunington-Whiteley). But it's been rough lately for Sam. He still hasn't yet landed a job, he feels inadequate that Carly is more stable than he is, all the while trying to find his role in life while also transitioning into being an adult, which is just as bad as going through puberty. While Sam wrestles with his identity crisis, Optimus Prime and the Autobots learn that a Cybertronian spaceship known as The Ark crash landed on the moon years ago, and they travel into space to retrieve it's contents. However Megatron and the evil Decepticons also learn of the spacecraft, which all leads to the final battle to see if good will conquer over evil. And what role does new Autobot Sentinel Prime (voiced by Leonard Nimoy) play in this epic battle?

There's an old saying that goes, "Third times the charm." In this case, it fits perfectly for the film. Believe it or not, everything in this movie just clicks. Sam's inner struggles while saving the world again, Optimus facing the illusions of the past, Carly striking a runway pose every time the camera is on her, but also Michael Bay's directing is much smoother and more streamlined. Of course having a much better script than the previous film also helps out Mr. Bay as well, thanks to screenwriter Ehren Kruger. While the film is still a fast paced snowball heading down the mountain, the film is much more tighter and more controlled.

While introducing new characters like Cary and Sentinel, plus Patrick Dempsey and Frances Mc Dormand (and some new Transformers like Shockwave and Roadbuster), the film also showcases some familiar faces like Lennox (Josh Duhamel), Epps (Tyrese Gibson), and the lovable Simmons (John Turturro). Also making appearances in the film are John Malcovich, Ken Jeong, Buzz Aldrin, and for some reason Bill O'Reilly, who does what he does best, playing a jackass.

TRANSFORMERS: DARK OF THE MOON is sure to be this summer's best popcorn flick to go brain dead to. But at least fans of the franchise will be thoroughly entertained, thanks in large part to the awesome 3-D effects (at least I was). So for the inner child that resides within you, have fun watching the film. Just make sure your chair isn't some evil Decepticon trying to steal your popcorn.

TRANFORMERS: DARK OF THE MOON is now playing in 2-D and 3-D in theaters nationwide, including at the Camera Cinemas in San Jose. To view showtimes, visit their website at http://www.cameracinemas.com/index.shtml

Thanks for reading, and enjoy the show!
Posted by Philip Castor at 7:03 PM