Phil attends a special screening of PURPLE RAIN with hostess Peaches Christ and Apollonia in person at the Castro Theater-July 1, 2011

Ok, this is how you kick off a three-day holiday weekend folks! After a long and grueling work week, I was ready to blow off some steam. I drove out to Union City to pick up my good friend Marisa and I took her to the famous Castro Theater. Last night, there was a party like no other! The theatre screened PURPLE RAIN, hosted by the fabulous Peaches Christ, and live and in person was the beautiful and breathtaking Apollonia! This was a night to remember, so let the festivities begin! 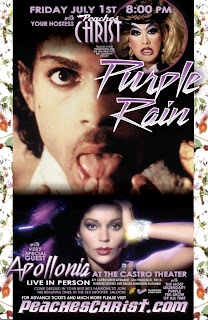 This was the first time that my friend had ever been to the Castro Theater, so I gave her a quick tour of the building. We found some primo seats on the left hand side of the theater and waited patiently for the show to begin. While the theater was filling up, they played numerous Prince songs, which only got the audience more hyped up. Then the pre-show began with a fantastic opening lip-synch performance of Prince songs by Peaches Christ (she portrayed The Kid) and her gorgeous cast: Syphillis Diller (Brenda Bennett), Becky Motorlodge (Susan Moonsie), PJ Souless (Wendy), Tangyna (Lisa), and the amazing Putanasca, who perfected her trifecta by portraying Nikki, Shelia E, and Apollonia! The sets and props (complete with a bubble machine and a ultra fab cardboard cut out of Prince's motorcycle) were awesome and it made the crowd go crazy! It was marvelous!!

Immediately after the fashion show, they held the Dress For The Revolution costume contest. Peaches and Fruitbomb gathered up on stage some of the best costumes I've ever seen. Prince himself would've been proud. One lucky SF native won herself an incredible gift basket, filled with all kinds of special goodies.

Then, the moment finally arrived! Peaches introduced Apollonia to the stage and the entire theater rose up to their feet and gave her a standing ovation. Peaches interview with the Purple Princess was fun, fast, and very entertaining. She dispelled the rumors about her sexual relationship with Prince, and confirms that they're "really good friend." She also talked briefly about her time on FALCON CREST, being neighbors with Carmen Electra, and the 2005 launching of her own multi-media entertainment company entitled Kotero Entertainment. She also didn't rule out about making another record, but she will be back on the big screen again soon. She is set to appear in a new Chris Rock film that will be released sometime next year! And believe it or not, this women is 51 years old and is more beautiful now than she was back in the 80's! Peaches then invited the audience to participate in the Q&A session. Apollonia also participated in a fan meet and great during the movie. And speaking about the movie...

If for some reason, you have NOT seen this movie yet, I have one thing to say to you: Where the hell have you been for the past 27 years?!? This is only one of the most important and influential films of the 1980's! The soundtrack won an Academy award for crying out loud! Ok for those who have yet seen this film, let me give you a brief synopsis: a talented young musician (Prince) battles his rival Morris Day on stage as well as for the heart of the enchanting Apollonia while trying to avoid the pitfalls and shortcomings of his abusive father. There you have it in a nutshell. Keep in mind I'm trying not reveal too much about the film. Historically speaking, this was a landmark film for Prince. The film was released on July 27, 1984 and was a smash it at the boxoffice. Everyone back in the 80's went to see the film, and then rushed out to by the soundtrack. It made Prince even more popular, and gave him the opportunity to experiment with his music. Instead of re-creating the same album again, he stayed with the funk and R&B and made critical acclaim albums like Parade (the soundtrack to his next film UNDER THE CHERRY MOON) and Sign 'o The Times. PURPLE RAIN is a fun-filled, sexually charged, and kick ass rock n' roll movie classic!

This was an amazing night!! Fashion, music, Apollonia, and the lovely Peaches Christ, it's gonna be hard to top this extravaganza! However I have faith in Peaches, for her next party will be the screening of the cult film SHOWGIRLS! Now that will be a blast, and this reviewer/fan cannot wait for that one! In the meantime, stay purple my friends!!

To learn for about the famous Peaches Christ and her shows, visit her website at http://www.peacheschrist.com/

To learn more about the Castro Theater and to view their movie schedule, visit their website at http://www.castrotheatre.com/index.html

Thanks for reading, and enjoy the show!
Posted by Philip Castor at 4:23 PM