After seeing both BUCK and LARRY CROWNE at the Camera 7 Pruneyard, the third and final film that I've been wanting to see was playing at the Camera 3 in downtown San Jose. So I made a mad dash over there to see one of the most amazing films ever! If you don't believe me, let me tell you what I thought about director Takashi Miike's new film 13 ASSASSINS and why you need to see this film! 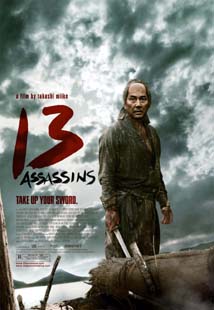 Here is the very basic synopsis of the film: A group of 13 samurai assassins have been given a mission to kill the evil Lord Naritsugu from ascending the throne and bringing a rein of terror, chaos, and war to the country. This is all you're going to get. If I told you more, it wouldn't do the film justice. Now the reasons why you should see this film.

To be quite honest, I'm having difficulty with trying to find the right words to describe what I thought about the film, so let I'm gonna let the inner fanboy come out: This was the BEST samurai film that I have seen in a very, very, very, long time! Not since Akira Kurosawa's 1954 masterpiece SEVEN SAMURAI  has there been a samurai film of this perfection! Miike's directing was perfect: smooth transitions, beautiful framing, and excellent in your face battle scenes. Like most of his films, there is a wonderful slow build up to the final third act, which in this film, makes a grand entrance. You have never seen a final battle scene quite like this one, and I promise you won't be forgetting about it anytime soon. Violence in the film can be compared to a ballet performance: striking, emotional, raw, and you must admire its sheer beauty. Art and violence sometimes go hand in hand. With this film, it's a perfect marriage, a union made in heaven.

The entire cast of the film is just amazing. There are no weak performances in the film. You'll swear you're watching real life samurais fighting to the death. I cannot list the entire cast for it will take too long (and also I can't speak or write Japanese), but let me just say that they all deserve a standing ovation for the film.

13 ASSASSINS is without a doubt the best film that Takashi Miike had made since 1999's AUDITION. I thought he would never be able to top it, but he has and this film surpasses any and all expectations that you may have. This is the film that all other recent samurai films will be measured to. No matter where you are, if this film is playing near you, take my word, go see this film!! You'll thank me later.

13 ASSASSINS is playing in limited screenings across the nation, including at the Camera Cinemas here in the South Bay. To view showtimes, visit their website at http://www.cameracinemas.com/index.shtml

Thanks for reading, and enjoy the show!
Posted by Philip Castor at 10:16 PM