Happy Fourth of July weekend everybody! To celebrate our nation's Independence Day, I went on a movie binge, once again seeing three films today. The first film up is an extraordinary documentary about an extraordinary man. This is a perfect example of what a documentary film should be: interesting, informative, and it touches the human spirit. Make no mistake, the film BUCK accomplishes all these requirements and then some. 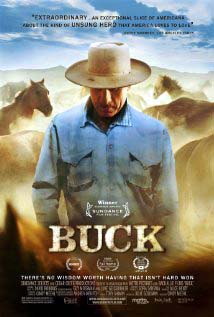 The film tells the story of Buck Brannaman, one of the last real cowboys in the world. He is also a living legend in the horse world and was the real life inspiration for THE HORSE WHISPERER (directed by his friend Robert Redford). The film follows Buck's adventures as he travels all over the country, spreading the gospel of mankind and horses and the bond between the two that leads to peace and harmony. This zen-like teachings carries of into Buck's life. Through on camera interviews with those who know Buck best, we learn about his abusive and violent childhood with his father, the passing of his mother, his adoptive parents saving him and his brother and him learning the philosophy of horses. Our cowboy fought through Hell and back, only to come out the winner in the end. With the help of his family and friends, Buck shows us what a real man is all about and how it's achieved.

Director Cindy Meehl does a really terrific job of bring to light of Buck's life and the trials and tribulations that he had to suffer to come out as not only a better man, but a better human being. Thanks to his adoptive parents, as well as learning the teachings of his horse predecessors Tom Dorrance and Ray Hunt. While Meehl gets just about all of Buck's family and family on camera, there is one person that is omitted from participating, that being Buck's brother Bill. We see the two of them as kids, performing their rope trick acts, as well as seeing them rise in popularity. Being on TV shows, and doing commercials creates the illusion that on the surface everything was good for the boys. However, for some unexplained reason, we do not get to see or hear Bill's story at all. Whether he wanted to participate in the documentary is unclear, but it would've been interesting to see how he's doing these days. Aside from that minor problem, the film plays out well and gives the audience the honor of meeting a man who defines categories and inspires us to better ourselves and better the world that we live in.

BUCK is one of those rare documentary films that touches us all and makes us better just by being able to witness a man who despite all obstacles proves that you can come out ahead and avoid the trappings of circumstances. A fantastic film that is a must see by all!!

BUCK is playing in theaters nationwide, including at the Camera Cinemas here in the South Bay. To view showtimes, visit their website at http://www.cameracinemas.com/index.shtml

Thanks for reading, and enjoy the show!
Posted by Philip Castor at 9:50 PM