Phil sees HARRY POTTER AND THE DEATHLY HALLOWS: PART 2 in 3D at the Camera 7 Pruneyard-July 20, 2011

After spending this past weekend watching silent films at the San Francisco Silent Film Festival, I needed a couple of days to get readjusted to the idea of seeing a "talkie" film once again. The first film I wanted to see once I got back opened last Firday while I was up in the city, so I missed the crowds, and I got to see HARRY POTTER AND THE DEATHLY HALLOWS: PART 2 in 3D in quite and blissful solitude. 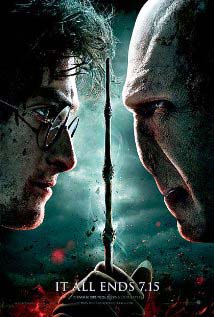 OK, I am going to take a departure from my standard regiment of film reviewing and I would like to take this opportunity to say something to all you people out there in cyberspace. I will return to my review of the film after this important message.

When I was a small child in May of 1977, the world that I was growing up in was, how do I put it, still in a state of chaos. Nixon, Watergate, and the Vietnam War was still fresh in the minds of the American public. The gas crisis crippled this country for a bit, and the Jonestown Massacre shocked people into a state of disbelief and sadness. The United States, at that time, looked like it was about to spiral out of control. It was during this period of disenchantment that a little, low-budget, sci-fi film caught my eye and took me on an imaginary ride that forever changed my life for the better. Little did I realize, that same film would also inspire other people from all walks of life to shake off the shackles of responsibility, and for about two hours, let them feel like a child once again, to experience the wonders of the imagination. That film was STAR WARS, and it gave people the chance to feel free, and to feel inspired to create a whole new world for themselves. The STAR WARS saga defined a whole generation of people, and helped create a bona fide pop culture phenomenon that will last for as long as mankind exists. For myself, that night in 1977 forever ingrained that sense of wonder and hope.

Now I am older, wiser, and have responsibilities. Work, bills, the usual adult baggage that most of us have. A lot of my friends have children, and this new generation's world is in a sorrow state as well. The September 11 attacks, a crippling recession thanks to the Bush Administration, global warming, cutbacks on public schools while higher tuition costs for college students, etc. It seems that history does repeat itself, which is where this generation's imagination and hope resurfaced in a big way. Harry Potter came out of left field, more specifically from England. Thanks to writer J.K. Rowling, her series of books starring our favorite wizard friend capture the imagination of an entire generation of kids who, like myself 25 years earlier, were looking for something to help them escape the weariness of today's problems and freed their imagination and elevated them to a higher plateau. The HARRY POTTER series of novels were a sensation right from the start, and as a double bonus, it got kids to read books again. Children reading books? Inconceivable!

It wasn't too long that Hollywood came calling for Rowling, and unleashed upon the world Harry Potter madness at the theaters. HARRY POTTER AND THE SORCERER'S STONE (2001) was a boxoffice hit, and soon Warner Brothers Pictures were set to bring to life the rest of novels onto the big screen. Now the boy wizard, who for the past decade has brought joy to so many, has his final adventure and thus, all is right with the world. The HARRY POTTER series is to this generation of kids what the STAR WARS saga was to mine. It sparked the curiosity, imagination, and wonderment that was needed so desperately, and as a result, defined themselves, just as I was before. And just like what George Lucas did, J.K. Rowling (along with Harry) will forever be in the hearts and minds of those who were touched my her magic. And for this I, along with everyone else in the world, would like to say thank you to Rowling for making me feel like that child once again.

This now brings me to my review for the last film in the series. All I'm gonna say to all of you is this: HARRY POTTER AND DEATHLY HALLOWS: PART 2 will forever be remembered as the greatest story ever told about the ultimate battle between good and evil, and in the end, will be loved by audiences everywhere!

HARRY POTTER AND THE DEAHLY HALLOWS: PART 2 in now playing in 2D and 3D in theaters nationwide, including the Camera Cinemas here in the South Bay. To view showtimes, visit their website at http://www.cameracinemas.com/index.shtml

Thanks for reading, and enjoy the show!
Posted by Philip Castor at 8:03 PM