The second film I saw was a another surprise. Now I'm not someone who is surprised often. There have been a few screening that I walked way thinking, "Yeah that was worth an hour and a half." This film was not what I was expecting, but I do have to say that LARRY CROWNE was indeed a fun film to enjoy for the next hour and a half. 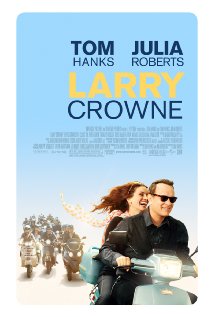 Tom Hanks stars as the one and only Larry Crowne, a retired 20 year cook in the Navy who now works at the local UMart (yes the comparisons to Wal-Mart are deafening). Then one day Larry is called in to a meeting with his superiors (thinking he was receiving his ninth Employee Of The Month award), but they ultimately lay him off due to his lack of a college education. With his life turned upside down (and with a lot of free time during the day), he enrolls at his local community college. There he makes some cool new friends like the free spirited Talia (Gugu Mbatha-Raw) and her jealous boyfriend Dell Gordo (Wilmer Valderrama) and joins their  motor scooter gang. He also falls in love with his speech class instructor Mercedes Tainot (Julia Roberts), who is having relationship problems with her loser/blogger boyfriend. Soon sparks fly as the two try to keep their respective feeling under control for the remaining of the semester.

This is Hanks' second film that he has directed (the first being the 1996 film THAT THING YOU DO!) and he wrote the screenplay with Nia Vardalos (writer/actress of 2002's smash hit MY BIG FAT GREEK WEDDING). The script is nothing special, but it has a lot of heart. You can tell Hanks and Vardalos had fun writing the script, and it shows in the film. Everyone in the film is having a good time making the film. Roberts is sweet and funny, with a dash of alcoholism thrown in for good measure. Hanks is having the time of his life in the film, and with good reason. His second time as director pays off, giving audiences a chance to just sit back, relax and have a good time. Also look for appearances by Cedric the Entertainer, Pam Grier, George Takei, Jon Seda, and Rita Wilson.

While the film avoids explaining the hot topics such as the current economic crisis that Larry was a victim of, or the student/teacher relationship, severe depression that lead to alcoholism. Some critics will despise the film for lacking any real value and of realism, but they're missing the point entirely. The film offers the audience escapism, and to be honest there absolutely nothing wrong with that.

LARRY CROWNE is a fun, light-hearted romantic comedy that's sure to please audiences. With everything that's wrong in the world, it's nice to get away from that once and a while. Even if it's only for a hour and a half.

LARRY CROWNE is now playing in theaters nationwide, including at the Camera Cinemas here in the South Bay. To view showtimes, visit their website at http://www.cameracinemas.com/index.shtml

Thanks for reading, and enjoy the show!
Posted by Philip Castor at 10:40 PM