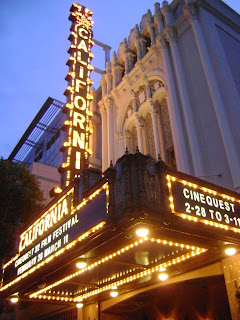 It's finally here! The most anticipated event in San Jose! Tonight I attended the opening night of Cinequest 22! All the waiting is over and now it begins again. For the next thirteen days I will be attending the festival, bringing you my readers some of the very best in independent, foreign, and documentaries. Tonight was like a homecoming for me because I got to see some old friends that I haven't seen since last year's festival. My good friend and fellow blogger Jason Wiener from Jason Watches Movies was there, along with my other friends Cheri Hughes Thomas, Christopher Garcia, Stephanie Lee, Philip Anderson, Kathryn Soler, and Melanie Frosty. Also for this year's festival I hope to make new friends and new memories.

For tonight's opening was THE LADY, the latest film from legendary director Luc Besson, whose films LE FEMME NIKITA, LEON: THE PROFESSIONAL, THE FIFTH ELEMENT, and THE MESSENGER: THE STORY OF JOAN OF ARC. have entertained audiences world wide. With his new film, Besson tells the story of political/civil rights activist Aung San Suu Kyi (Michelle Yeoth from CROUCHING TIGER, HIDDEN DRAGON and MEMOIRS OF A GEISHA) as she becomes the core of Burma's democracy movement. The film is a powerful and gripping story about love, sacrifice and the power to change the world for the better.

In case you may not know this, Aung San Suu Kyi is a real person and the film is based on her life. Her father was General Aung San and he was about to lead the Burmese citizens towards democracy before he and his ministers were brutally assassinated when Aung was only three years old. Fast forward several years later and she is now living in England with her husband Michael Aris (David Thewliss who also plays his twin brother Anthony in the film) and her two sons Alex (Jonathan Woodhouse) and Kim (Jonathan Raggett). When she receives word that her mother is ill, she returns home to Burma which ignites the idea of freedom and change. But Burma is ruled by its powerful and evil military that refuses to release their stranglehold on the country. With her father's shadow engulfing her, Aung begins to reach out to the people of Burma and tells them it is now time for democracy to rule the land. However, thanks the Burma military, they use every sneaky trick to punish her and destroy her will. This eventually leads Aung to be held on house arrest before the elections. She remained under house arrest in Burma for almost 15 of the 21 years, from July 20, 1989 until her most recent release on November 13, 2010. During this time she was awarded with the Nobel Peace Prize on October 14, 1991. But while under house arrest, she was not able to help take care of her husband Micheal, who passed away on his 53rd birthday on March 27 1999 from prostate cancer.

Director Besson continues his streak of creating strong, independent women who challenge the status quo of females portrayed in modern cinema. Yeoth is just absolutely amazing in the film; giving an outstanding performance as Aung San Suu Kyi. One has to wonder if she will be nominated for this role at the Academy Awards show next year. Also give credit to Thewliss for bringing life to Micheal on screen and showing us his undying devotion to his wife and to her cause. He stood by her, even when things looked bleak and when he was denied traveling to be by her side near the end. Besson's directing is sharp, precise, engaging and thought-provoking. A great film to start of Cinequest 22!

Ladies and gentlemen, the Cinequest Film Festival has officially arrived and you can partake in this very important movie event. To view film schedules, information about the festival, and to purchase tickets and passes, visit their website at www.cinequest.org.

Thanks for reading, and enjoy the show!
Posted by Philip Castor at 1:02 AM