Phil attends the exclusive screening of NAPOLEON at the Paramount Theatre in Oakland-March 24, 2012 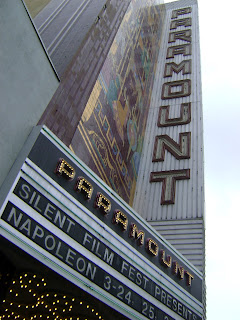 This past Saturday I, along with several thousand other movie lovers, attended the first screening of a two-weekend event of Abel Gance's 1927 long, lost silent film classic NAPOLEON. Presented by the San Francisco Silent Film Festival, in association with the British Film Institute (BFI), The Film Preserve, Photoplay Productions, and director Frances Ford Coppola's American Zoetrope, the film was brought to the magnificent art deco Paramount Threatre in Oakland, California. Bringing this 5 1/2-hour silent film to life was conductor Carl Davis, who along with the 46-piece Oakland East Bay Symphony, performed an outstanding musical score. To say that this was THE movie event of the year would be a gross understatement.

For me, the day started with excitement and anticipation. Myself along with my good friend Jason Wiener (from Jason Watches Movies) and Christopher J. Garcia (Cinequest) had front row seats to this ultimate cinematic experience (we aren't called the Front Row Freaks for nothing). I also saw other friends that I usually see at the SF Silent Film Festival at the Castro Theatre during July. This was my first time being at the Paramount Threatre, and I have to say that this place is THE most amazing and breathtaking theatre that I have ever seen! The art deco was just fabulous, and the incredible details that are found in everything; the boxoffice, the carpets, the stairs, the lobby, everything is art deco and I loved it! If you haven't been to the Paramount Theatre yet, good news folks! They give tours of the theatre! So next time you're out here, make sure that this place in one of your destinations! 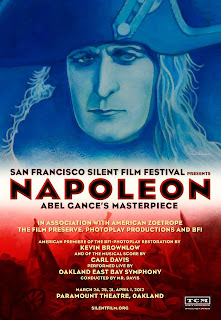 Dubbed "The Holy Grail of silent masterpieces" the film was a labor of love for famed film historian and Academy award winner Kevin Brownlow, who's fascination with the film began in 1954 when he first saw a small 20 minute version of NAPOLEON at the young age of fifteen. Since then he has spent the past FIVE DECADES (yes you read that right!) researching, unearthing, and restoring Gance's silent film, which is now the most complete version of the film. Through blood, sweet, and tears, Brownlow's hard work and determination paid off as the audience in the Paramount Theatre on that cold, wet, and rainy Saturday were treated to one of cinema's crowning jewels of the silent era!

Abel Gance's directing is proof that he was way ahead of his time. Most of the film looks like it was hand held, which gave the film a documentary style look that has been copied by numerous Hollywood directors and in films ranging from THE FRENCH CONNECTION to CHRONICLE. From opening with young Napoleon (played by Vladimir Roudenko) commanding his schoolmates in a snowball fight to General Napoleon (portrayed brilliantly by Albert Dieudonné) leading his army to victory, Gance's film unfolds before our very eyes and transports us to a visual nirvana the likes I have never seen before, especially the last twenty minutes of the film when the screen expanded to a curved 85 feet panorama! Gance originally called it Polyvision, and it was astounding! Having three screens showing three different images and at times one complete scene! Again simply astounding! The film is a testament to Gance's genius!

As stated earlier, composer/conductor Davis' score for the film was just as beautiful as the film. After the film's conclusion, the entire audience rose up and gave Davis and the Oakland East Bay Symphony a standing ovation. Just try to imagine performing to a 5 1/2 hour silent film (with three intermissions and a two-hour dinner break) and keep your cool composure. To Davis and the Symphony, I applaud you for creating a memorable score to a memorable film! Also a big thank you to Kevin Brownlow for restoring this lost classic and to the San Francisco Silent Film Festival fro bringing the film to the Paramount Theatre! And last but not least, to Abel Gance, thank you for creating one of the most amazing films I have ever seen! 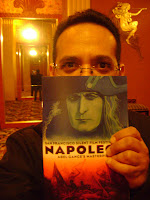 This film extravaganza is truly indeed a "once in a lifetime event." For those who missed out on the showings this past weekend, you are in luck. There are still two more showings this weekend (March 31st and April 1st) and there are still a limited amount of tickets left, but they are going fast! So make plans to attend this monumental event! Ticket are available at the San Francisco Silent Film Festival's website at http://www.silentfilm.org/. NAPOLEON is and was Abel Gance's greatest achievement as well as Kevin Brownlow's lifetime passion. Don't miss out on what has been called "A major event" by director Martin Scorsese, "Absolutely a once-in-a-lifetime experience. Just glorious, glorious, glorious" by film historian/author Cari Beauchamp, and legendary film critic Leonard Maltin described his experience with one word, "Thrilling." So don't wait people! Go buy your tickets today and be part of film history this weekend!


Thanks for reading, and enjoy the show!
Posted by Philip Castor at 4:48 PM