Hello again everybody and welcome to Day Seven of my trip to the Cinequest Film Festival. Today I saw yet again five films! Yup just another typical day at the office for me. All five films I saw over at the Camera 12.

First film up is the outstanding Belgium film OFFLINE. Wim Willaert (EX DRUMMER) portrays Rudy, who's just been released from prison after serving seven years. He has two goals that he wants to accomplish: start up his own washing machine repair business and to reconcile with his family that he left behind. The latter, however, is easier said than done. While he tries to reconnect with his daughter Vicky, played by the stunning Anemone Valcke (OXYGEN from Cinequest 2012), his demons once again threatens to destroy all his plans reuniting with his daughter.

Writer/director Peter Monsaert does and incredible job of creating a film that is intriguing, dramatic, and mesmerizing. Willaert does an extraordinary job of bringing Rudy to life: thoughtful, hurt, and haunted are just some of the emotions that he conveys his performance. Valcke is just riviting in her role as Vicky; showing us that underneath her beauty lies a scared and broken little girl who missed her father. Truly a work of art! After the screening, Peter Monsaert himself was in attendance and conducted a Q&A session. This a fascinating and thought provoking film that you really should see! The film will be screened again on Tuesday, March 5th at 9:30pm and on Thursday, March 7th at 9:15pm. Also visit the film's official website at www.offlinedefilm.be. 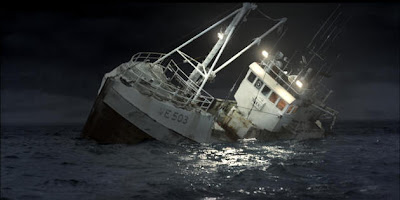 The second film I saw was THE DEEP. Based on actual events, the film's about a fisherman named Gulli, who tries to survive in the freezing Atlantic Ocean after his boat capsizes off the south coast of Iceland. That's basically all you need to know.

All I can say is wow! This actually happened people! And what's cool is that during the end credits, we see the actual footage of Gulli being interviewed for the news in his hospital bed! Unbelievable but true! Unfortunately, this was the last screening of the film, but keep your eyes peeled if it comes out to a theater near you!

Film number three for the day was the comedy THE KITCHEN.  It focuses on a woman named Jennifer (Laura Prepon from That 70's Show) who is having her thirtieth birthday party. But what starts out as a day of celebration quickly spirals into a most ill-fated day Jennifer wishes she could forget, in this ensemble comedy set entirely in a kitchen.

This was a cute little film. Laura Prepon played her character sweetness, heartache, and gusto. Director Ishai Setton (THE BIG BAD SWIM) does a terrific job of keeping the laughs flowing smoothly throughout this one location. In fact, you could say that the kitchen is also a character in the film! Many talented actors and actresses appear in the film, such as Dreama Walker, Bryan Greenberg, Pepper Binkley, Matt Bush, Catherine Reitman, and Jillian Clare just to name a few. Now today was the last screening of the movie. However, it has been picked up for distribution by Monterey Media so look for it in select theaters and/or on DVD. Also check out the film's official website at www.thekitchenmovie.com and Facebook page.

The fourth film I saw at the Camera 12 was the comedy THE SPACE JOCKEY PURSUIT. The film's about two very different brother: the button downed, responsible older brother Tom (Matthew Titshaw) and his insane and inspiring actor baby brother Alvin (Barrett Doyle). Tom is about to take over the family business while Alvin is preparing to audition for Space Jockey, the most talked about role in Hollywood. Upon finding out that hit father is planning to commit Alvin back to the mental institute, Tom "borrows" his father's state-of-the-art solar powered car and drives Alvin to his audition, which is being held in Chicago. Along the way they pick up Alvin's muse and friend Cecilia Pinkerton (Jonette Page), but she has no interest in reliving Alvin's insane delusions of grandeur. Soon the three must band together as they must get Alvin to his audition on time and avoid their father and the police.

This was the film debut of director Brian Titshaw, whose brother Matthew Titshaw wrote the script. The film is laced with sincerity and humor, referencing film legend Marlon Brando's method acting technique (which Alvin does with hilarious results). While mostly a comedy, the film's handling with the issue of mental disease is pure and sweet. Alvin is crazy, in all sense of the word. But his ability to take chances and to live in the moment inspires Tom to re-examine his life and to live his live the way he wants to. Here's a film that I thoroughly enjoyed! After the screening, both Brian and Matthew Titshaw, as well as a couple of producers, participated in a fun Q&A session. The film will be screened on more time on Friday, March 8th at 4:45pm. Also make sure to visit the film's official website at www.thespacejockeypursuit.com and on Facebook as well.

The fifth and final film I saw was the incredible LONELY BOY. Franky (Alev Aydin) is not enjoying his life right now. He has a job that he doesn't like (mostly because he was fired), his sister is constantly calling him (because he doesn't answer the phone when she calls), he lives in a dumpy apartment, he's lonely and cannot connect with anybody. But all his problems stems from just one thing: he has schizophrenia. And he also decided to stop taking his medication, which poisons his ability to cope in the real world. But then he meets a young girl named Alex (Natalie Distler), who he develops a deep connection with, but the voices in his head threaten to destroy the one thing he loves the most.

Unlike the previous film I saw, this one deals with the issue of mental illness in a more serious tone. Alev Aydin just nailed his role as the mentally ill Franky, bringing a wide range of emotions and a high level of believability! He was just amazing to watch in the movie! And the lovely Natalie Distler also turned in a great performance, as her Alex character is the anchor that will prevent Franky from falling over the edge. Another highlight film from the festival!! Definitely go see this film!! Highly recommended!! The movie will be screened one last time on Thursday, March 7th at 4:30pm. Also visit the film's official website at www.lonelyboyfilm.com and follow the film on Facebook and Twitter too.

Another incredible day of movie watching, which brings my total to 31! Remember the festival runs till March 10th so there's still time for you to join in on the fun here in San Jose! To view the festival's film schedule and purchase tickets and passes, visit their website at www.cinequest.org.

Posted by Philip Castor at 1:33 AM