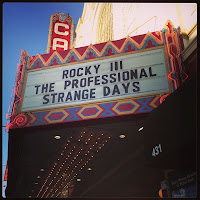 Hello again from the City by the Bay! That's right I'm back up here in San Francisco to attend the latest Midnites for Maniacs triple feature here at the historic Castro Theatre. Hosted by ultra cool Jesse Hawthorne Ficks, the theme for the show was titled "Mentors Matter." The theatre screened three classic modern day films that showcased this perfectly. Plus all three movies were the original 35mm film prints! As always, Jesse handpicked some awesome trailers to show, which by the way, are from his own personal collection! Yup, that's how we roll here up here! So let the party begin!!

The first film of the night was the totally awesome ROCKY III. Picking up where the second film left off, Rocky Balboa (Sylvester Stallone) is now the undisputed heavyweight boxing champion of the world and is enjoying the privileges that come with it. His manager Mickey (Burgess Meredith) has been hand-picking his opponents so Rocky hasn't been tested. That is until the number one contender Clubber Lang (Mr. T) challenges Rocky to the title. Clubber wins the championship and Rocky is left defeated, a former shell of himself. Nobody believes in him anymore, except his wife Adrian (Talia Shire) and his new trainer: former world-champion Apollo Creed (Carl Weathers). With Creed's help, Rocky trains harder than ever before, to once again get back that eye of the tiger, that edge that he once had.

At this moment in time Sylvester Stallone was at the top of his game when he made this film. He wrote and directed the film, was in the best shape of his life, and complete total control over his work, and had the star power to do and make whatever he wanted. Mr. T was incredibly charismatic in the film. He had so much personality it was just pouring out of the film! Also making an appearance in the film was wrestling superstar Hulk Hogan as Thunderlips! Now it's a shame that Stallone will never get the kind of respect and accolades that other filmmakers and actors receive.  When we think of great actors we think Robert Di Niro, Gene Hackman, Al Pacino, Warren Beatty, or George Clooney. Or how about directors such as Martin Scorsese, Frances Ford Coppola, Steven Spielberg, or George Lucas. But here is a man that won an Oscar for his screenplay for ROCKY back in 1976! Believe it or not, Stallone is a very talented filmmaker, screenwritter, and actor. His films a very personal and has his personality can be found in all his films! The movie was originally released by United Artists on May 28, 1982.

Movie number two of the night was THE PROFESSIONAL (aka LEON: THE PROFESSIONAL). The film stars
Jean Reno as Leon, a professional hitman who lives in a New York apartment with a twelve-year old girl named Mathilda (Natalie Portman), whose whole family was killed by a police raid led by corrupt and psychotic cop Stansfield (Gary Oldman). Soon Leon takes revenge on the police officers that killed Mathilda's family, which makes Stansfield very upset.

Directed by Luc Besson (LA FEMME NIKITA, THE FIFTH ELEMENT), the film is an extraordinary masterpiece of cinema. Besson's directing is just incredible, Reno's acting is superb, and young Portman just radiates as the foul mouthed Mathilda.  I consider this the perfect film: it has a great story, well developed characters, a fantastic cast, action, humor, pathos, and amazing directing. I have seen this film several times over the years and the film just keeps getting better with each viewing. Truly a classic from the early 1990's! The film was originally released by Columbia Pictures on November 18, 1994.

The third and final film for the night was the underrated STRANGE DAYS. Directed by Academy Award winner Kathryn Bigelow (NEAR DARK, THE HURT LOCKER, ZERO DARK THIRTY), the film takes place on the last days of 1999. Former cop turned  recorded memories and emotions dealer Lenny Nero (Ralph Fiennes) gets caught up in a bizarre situation when he receives a disc that contains the memories of a murderer killing a prostitute named Iris. Lenny soon gets caught up in a world of murder, rape, and blackmail that somehow involves his old girlfriend Faith Justin (uliette Lewis) and her new beau Faith Justin (Michael Wincott). Aiding him on this case are his friends Lornette 'Mace' Mason (Angela Bassett) and Max Peltier (Tom Sizemore). With the end of the millennium fast approaching, Lenny needs to solve this mystery fast.

Not only was this Sci-Fi thriller of a film directed by Bigelow, but the screenplay was written by her then husband, Academy Award winner James Cameron (TERMINATOR 2, TITANIC, AVATAR)! With its depictions of  hi-tech trafficking, jacking in, and nihilistic future, the film was a head of its time. In fact, the film was released two whole years before THE MATRIX, which featured a lot of the same themes and features. But for some reason, the film was D.O.A. at the boxoffice. However, since then it was rediscovered on VHS first, then DVD and cable and is now considered to be not only a cult classic, but one of the unsung greats from the 1990's! The film was originally released by Universal Pictures on October 15, 1995.

Well folks, there you have it Another amazing M4M show has come and gone! But there's another show next month at the Castro Theatre on Friday, April 19th so mark that date on your calendar! To learn more about Midnites for Maniacs, visit their website at www.midnitesformaniacs.com. To view upcoming shows at the Castro Theatre, visit their website at www.castrotheatre.com.

Thanks for reading, and enjoy the show!
Posted by Philip Castor at 10:41 PM