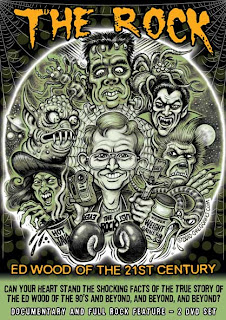 As you may remember a couple of weekends ago, I attended a very special encore screening of the local indie documentary SUTRO'S: THE PALACE AT LAND'S END at the Niles Essanay Silent Film Museum. It was there that I met local hero Strephon Taylor, founder and president of November Fire Recordings and distributor of the SUTRO'S documentary. While talking to him and his wife Heather, I mentioned that I was a film buff, an avid horror film fanatic, and do movie reviews. So out of the kindness of his heart, Strephon gave me a DVD copy of the 2010 film he produced to review. The documentary THE ROCK: ED WOOD OF THE 21st CENTURY chronicles the life and films of David "The Rock" Nelson. Now I have never heard of this guy before, and now after watching the documentary, I cannot wait to meet this guy!

Unlike other pretentious documentaries, directors Jace Whitman & Chuck Jarmin jettison the standard and traditional narrative form and does a complete 180 degrees. Basically, they just pointed the camera in front of The Rock and let's him say whatever the hell he felt like saying. And this makes the film so much more interesting! Hearing Dave speak idiosyncratic ramblings about his beliefs on life, God, and monster movies are just gold! Never have in my life have I heard ramblings like this! But his ramblings tell one hell of a story, to which Dave does like no other! From his Marine days, his body building training tips, his films and meeting his muse Janet Lyn, David tells it like it is, without any filter.

David "The Rock" Nelson was a former Golden Gloves boxer and was going to become a preacher if not for the intervention of  Michael Flores, the creator of the Psychotronic Film Society (to which in the film he takes full credit for making him become a filmmaker). So in the early 1990s, he dropped out of Bible college and started churning out a series of backyard made, no-budget monster movies that, literally, brought him acclaim and recognition. According to the Psychotronic website, Dave "makes the cheapest, most poorly acted and ineptly directed monster movies ever made, shooting them on videotape and editing them on an editing bay that consists of two VCRs, his camera, and a Radio Shack f/x box." He has made more than 30 short films and over 20 feature length films! Believe it or not, because of his films he has been on the front cover of the Chicago Reader, held sold out shows, and was even on the old John Stewart Show! All this from making cheapo monster flicks!

The man lives, breathes, and eats monster movies, and it is this passion that compels you to watch his films from beginning to end, no matter how bad they are. And they are pretty bad, not gonna lie to you about this. But as I stated, David LOVES monster movies, loves making them as well. And it's because of this love and dedication that earned him the title, "Ed Wood of the 90s and beyond." Case in point, this special edition DVD set came with a copy of one of his films WEREWOLF AND THE WITCH. The film's about....well... a werewolf and a witch. Conrad Brooks appears in the film, along with himself and Janet Lyn and it's bad folks. But beneath the bad acting, terrible dialogue, and the non-existent sets, there is an innocence and a child-like quality that just makes you laugh and smile. David's films reminds us of our childhood; making these kinds of films with our friends was all the rage back in my day. If your folks had a video camera, the first thing you and all your friends did was make a monster movie. David's films capture that youthful spirit and idea of going out and making a movie and having fun doing it.

THE ROCK: ED WOOD OF THE 21st CENTURY is a fantastic, hysterical, and informative documentary as well as a loving tribute to one of the most original filmmakers I have ever seen! Not since Edward D. Wood Jr. has there been a filmmaker making cheapo monster flicks and having the greatest time making them. For this, I salute you David "The Rock" Nelson. Thanks for making me feel like a kid again. 5 out of 5 stars! Highly recommended!!

Thanks for reading, and enjoy the show!
Posted by Philip Castor at 6:01 PM