So I've been trying to get caught up with what's out in the theaters. Now earlier in the day I saw the powerful indie film BEASTS OF THE SOUTHERN WILD, then the political comedy THE CAMPAIGN. And so I ended my movie day with the new action/adventure film THE EXPENDABLES 2. Let this be a lesson to myself: I need to quit while I'm ahead. 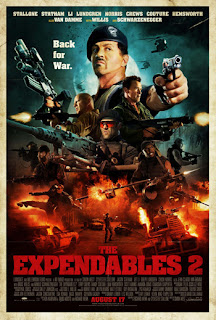 So here's the film's synopsis that was written by its distributor Lionsgate, "The Expendables team of Barney Ross (Sylvester Stallone), Lee Christmas (Jason Statham), Yin Yang (Jet Li), Gunnar Jensen (Dolph Lundgren), Toll Road (Randy Couture) and Hale Caesar (Terry Crews) along with newest members Billy the Kid (Liam Hemsworth) and Maggie (Nan Yu) are reunited when Mr. Church (Bruce Willis) enlists them to take on a seemingly simple job. When things go wrong, the Expendables are compelled to seek revenge in hostile territory, where the odds are stacked against them. Hell-bent on payback, the crew cuts a swath of destruction through opposing forces, wreaking havoc and shutting down an unexpected threat in the nick of time - five tons of weapons-grade plutonium, more than enough to change the balance of power in the world. But that's nothing compared to the justice they serve against the villainous adversary (Jean-Claude Van Damme) they seek revenge from." Somewhere in this synopsis, Lionsgate forgot to mention that the movie sucked ass. I hate it when Hollywood studios leave that part out.

There is absolutely nothing new in this sequel. It's lame, it's boring, it's the same crap that we saw in the first film! Stuff blows up, guns are shot, big fight scenes, and two dimensional characters portrayed by juiced up actors who are way passed their prime. Sure it was a hoot to see Chuck Norris return to the big screen as the lone wolf Booker, but it was kinda painful to see the very old and haggard Arnold Schwarzenegger as Trench. In some scenes, it looked like Schwarzenegger was having a heart attack. However, Norris looked great in the film, and didn't show his age at all! Also making a small appearance in the film is BUFFY THE VAMPIRE SLAYER alum Charisma Carpenter as Lee Christmas' girlfriend Lacy. Oh how the mighty and popular have fallen.

The film was directed by Simon West, the man responsible for such films as LARA CROFT: TOMB RAIDER, WHEN A STRANGER CALLS, and THE MECHANIC starring Statham. West has another film coming out in September called STOLEN, starring actor for hire Nicolas Cage. And I bet you that one is going to suck as well.

THE EXPENDABLE 2 is your typical brain dead, shoot 'em up, big explosions, testosterone driven, action flick that will lower your I.Q. The only two good things about the film is the poster and the ending. So let's say we skip seeing this one folks, unless you want to come out of the theater totally brain dead. 1 out of 5 stars!


THE EXPENDABLE 2 is currently playing in theaters nationwide, including the Camera Cinemas here in the Bay Area. To view showtimes, visit their website at www.cameracinemas.com.

Thanks for reading, and enjoy the show!
Posted by Philip Castor at 10:19 PM