Phil attends the RiffTrax Live Broadcast of MANOS: THE HANDS OF FATE at the Century 20 Oakridge-August 16, 2012 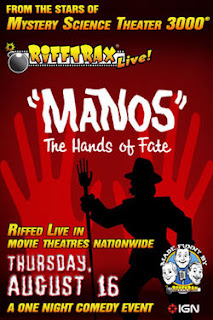 Hello again everybody! So this past Thursday night, my sister Stephanie, my brother Thomas and his fiancee Sharon and I attended the live RiffTrax broadcast of MANOS: THE HANDS OF FATE, one of the WORST movies ever made! So we all couldn't wait to see this show!

So if you don't know what a Rifftrax is, let me give you all a quick definition. Rifftrax "are downloadable audio commentaries featuring comedians Michael J. Nelson, Kevin Murphy and Bill Corbett heckling (or riffing) films in the style of Mystery Science Theater 3000, a TV show in which Nelson was the head writer, and later the host. The RiffTrax are sold online and delivered by digital download," according to the website Wikipedia. But all this is just a fancy way of saying, "it's funny as hell!" Now Nelson, Murphy, and Corbett do the occasional live shows from one venue that is broadcast to hundreds of theaters all across the country, courtesy of teaming up with NCM Fathom Events. The closest theater that was participating in the live broadcast was the Century 20 Theaters in Oakridge Mall. So all of us headed over there to catch this awesome cinematic event!

Before the show, the RiffTrax broadcast had some hilarious jokes put up on the screen to get the audience primed and ready. Then at 8pm, the show began! Coming to us live from a theater in Nashville, the night started off with a couple of side-splitting shorts. The first short entitled WELCOME BACK, NORMAN was about a traveling salesman named Norman who flies back to his hometown airport and all the hilarious shenanigans that happens to him and his car. Now what I would like to know is this: exactly what kind of film was this supposed to be anyway? Was it a comedy? A documentary? An educational short about the plight of the American salesman? Whatever the point of making this film was, thanks to the RiffTrax crew, I was laughing hysterically, especially when they popularized Norman's catch phrase of "Ugh!" The whole audience was quoting this throughout the rest of the show!

The second short was an educational short that was just really creepy! AT YOUR FINGERTIPS: CYLINDERS showed the young children of America in the 1970's how much fun it is to make things out of cylinders. Arts and crafts were never this funny, as the guys tore this short a new one!

After the shorts, Mike had to make way for our "sponsor" for this evening's show. He then proceeded to show us an old Sixties commercial of a man drinking prune juice. Now if that wasn't scary enough, the man had a SECOND glass of prune juice! Yup, every man, woman, and child squirmed in their seats during this one!

Then it was time for the main event of the evening! Now the film was featured in the final episode of season four of Mystery Science Theater 3000 (MST3K) on January 30, 1993 (#424 to be exact) and it immediately became the show's most popular episode! The film was written, directed, produced, and starred Harold P. Warren, who at the time was a Texas fertilizer salesman (which explains way the film sticks like poo)! The films about a vacationing family who get lost and stumble upon a Satanic Inn run by a lackey named Torgo who, "takes care of the place while The Master is away." While watching this, I did have flashback jokes from the old MST3K episode, but it was only fleeting.  That night, Nelson, Murphy, and Corbett unveiled an all new riff and jokes that made the audience laugh so hard that I thought I saw people passing out! The jokes were right on, creative, and just flat out hilarious! I think their riff was better than the original! As Mike said, "It's the worst film ever made that's not a TRANSFORMERS movie." Also, during the show's credits, Torgo sings his version of the classic Eagles song "Take It Easy," with the lyrics telling the film from his point of view! The video showed clips of the upcoming MANOS sequel!! The film was written, produced, and directed by Rupert Tailbot Munch (who plays Torgo in the sequel) and looks to have some of the cast of the original film to make appearances!

Now a quick sidebar for you cinephiles!  According to Wikipedia, "In 2011, the original 16mm Ektachrome camera workprint of MANOS: THE HANDS OF FATE was discovered in a collection of 16mm films by Ben Solovey, a Florida State film school grad. Solovey announced his intention to preserve and restore MANOS for a High Definition Blu-ray release. The DVD release is a digital copy created from a 35mm print magnified from a 16mm workprint. Solovey financed the restoration via crowd funding website Kickstarter, raising $48,000 (nearly five times the initial goal). The restored print will be released on Blu-ray in the fall of 2012." How unbelievable is this bit of news? Yes folks, pretty soon you can watch the worst film ever made in glorious High Definition in the very near future! What a wonderful age we live in!!

This was a great RiffTrax event! I really hope these guys will release this show on Blu-Ray and DVD soon because I want a copy of this so I can watch it over and over again just like my MST3K DVD!! Now for all you folks out there who missed out on all this laughter, don't worry because you'll be getting a second chance to see these guys again real soon! On October 25, 2012, there will be another RiffTrax live event, and this time they will be riffing on the modern cult classic BIRDEMIC, which was filmed in Sunnyvale, the next city over from San Jose! And just in case you have never seen this film....well.....let's just say that you have never experienced pain like this before! If you thought MANOS was bad, what until you see this cinematic piece of crap! So mark this date on your calender and be sure to check out RiffTrax Live!!

Posted by Philip Castor at 8:45 PM