Phil gets an exclusive sneak peak at the new horror film HATE CRIME-Aug. 7, 2012 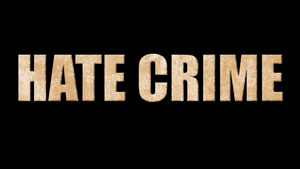 Now I have been very fortunate to attend many important film events and festivals so far this year. Tonight's film review came courtesy from the film's director himself, 20 year old indie filmmaker James Cullen Bressack. While on Facebook, Bressack messaged me and asked if I would be interested in reviewing his latest work, the horror film entitled HATE CRIME. I said yes of course, and he then emailed me a link to watch the film. So I sat back and was prepared to watch this very exclusive movie. After it was over, I couldn't believe what I had just saw!

The film's about a recently relocated family that is having a birthday party when their home is invaded by some unexpected guests. Now Bressack requested that I not give away any details of the plot in this review, and I will honor that request. However, let me just say that this was one of the most brutal films that I have seen in a very long time!

The film is shot in the "Found Footage" vein, ie THE BLAIR WITCH PROJECT, THE DEVIL INSIDE, and those type of films. But what sets this film apart from those that came before is that this felt much more real. Hate crimes still exist out there, and the story told here could very well happen! With the recent climate of openly hate towards having a black president, gays having the right to marry, illegal aliens, and so forth, we have come full circle as to what this country was like during the 1960s. Those who were part of the making of this film deserve to be praised for showing us (and reminding us) that even though we have made major advances in our country, we as a society have not yet learned how to get along with one another.

This is an ugly movie to watch; dealing with such a heavy subject mater, but what gives the film its authenticity are the powerful performances by the entire cast. So let me just congratulate Jody Barton, Maggie Wagner, Nicholas Clark, Sloane Morgan Siegel, Greg Depetro, Debbie Diesel, Tim Moran, and Ian Roberts on an outstanding job of conveying such a high level of realism in the film. Scared, terrified, anger, confusion, and hate are just some of the emotions that are found within the frames. This couldn't have been an easy film to act in, and all of these amazing actors and actresses deserve a round of applause!

Of course credit must also go to Bressack, who directed and wrote the film (along with Jarret Cohen). There were no punches pulled in this film. Skillfully crafted with such intensity and preciseness, one has to wonder how will  Bressack top this film!

HATE CRIME is one of my top picks for Best Horror Film this year! If Wes Craven's THE LAST HOUSE ON THE LEFT had rapped Bryan Bertino's THE STRANGERS, this would be the bastard offspring of that incident. No other horror film has left me this disturbed in quite some time. And once you've seen this, I can guarantee it that you will be too! Five out of five stars!!

You can follow James Cullen Bressack on Twitter at https://twitter.com/JamesCullenB. His film company Psykik Junky Pictures's website www.psykikjunkypictures.com is still under construction, but keep your eyes peeled for it to launch soon!

Thanks for reading, and enjoy the show!
Posted by Philip Castor at 11:12 PM