Phil sees BEASTS OF THE SOUTHERN WILD at the Camera 7 Pruneyard-August 24, 2012

It has been far too long since I have seen an original film. Usually, you would have to look high and low to find a film that really and truly grabs you right from the start and doesn't let go til the end of the credits. However, this past weekend at the Camera 7 in the Pruneyard Campbell, I saw one of the most intriguing, fascinating, and highly original films I have ever seen! The film I am talking about is BEASTS OF THE SOUTHERN WILD. 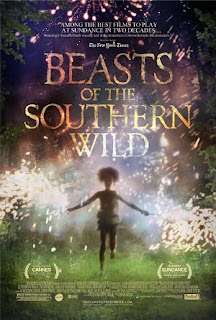 Directed by Benh Zeitlin and written by Zeitlin and Lucy Alibar from Alibar's one-act play Juicy and Delicious, the film's about a six-year-old girl named Hushpuppy (Quvenzhane Wallis), who along with her sick and dying father Wink (Dwight Henry) live in "The Bathtub," a southern Delta community at the edge of the world. But when her father becomes terribly ill, the forces of nature begin to unravel simultaneously. Rising temperatures has caused the polar icecaps to melt, causing the water to rise and threaten to drown her community. It also unleashes an army of prehistoric creatures called aurochs. Wink tries to teach Hushpuppy everything he knows she can be brave and strong. During this turbulent time, she leaves home to go search for her long, lost mother. But will she make it back home in time to see her father or will the aurochs find her first?

The film is a powerful example of experimental filmmaking while at the same time confronting social, political, and enviormental topics (extreme poverty, alcoholism, global warming, and child neglect are just the first few overt issues) while anchoring the story with deep emotional connections to our protagonist Hushpuppy. Young Quvenzhane Wallis is just superb in the film, and her performance is so convincing, I wondered, after viewing the movie, how did director Zeitlin explain to her what to do in certain scenes. Because there were some scenes that were just downright emotionally heartbreaking and some dealt with adult situations, such as drinking, swearing, and death. The film is told through Hushpuppy's eyes, which makes the film that more magical and horrifying to watch.

Benh Zeitlin sets the tone of the movie right away, which puzzled me for a bit. Was this a narrative film was this a documentary, chronicling a community that was left to its on demise; a community that was forgotten as well as abandoned. The film is shot in the handheld manner, giving the film that  realism feel. It gives this community authenticity even though it's not real at all, but it could very well be. "The Bathtub" is a fictitious island located among the other islands of southern Louisiana, however it is not protected by the New Orleans levee system. The film shows us how they survive, which resembles a lot like a third world country: poverty stricken, living in makeshift homes built out of debris, rubble, and junk, wearing the same clothes day in and day out. While we sympathize with them, we are also drawn to them by their determination to live like there's no tomorrow. While they're physically poor, they are rich in spirit and life.

As stated previously, the film touches on real life topics, but it is also filled with metaphors. The prehistoric aurochs can be seen as metaphors about outside forces: global warming, the impending doom on "The Bathtub" inhabitants, or just life itself spiraling out of control. However you interpret it, Hushpuppy seems to know what it means, which shows us all the power of a child's mind.

BEASTS OF THE SOUTHERN WILD is one of the most mesmerizing, striking, and poignant films I have ever seen before! It is a tour de force in both storytelling and filmmaking! You must see this movie with your own eyes! I predict that come Oscar season, look for this film to take home many golden statutes! 5 out of 5 stars!! Highly recommended!!


BEASTS OF THE SOUTHERN WILD is playing in select theaters nationwide, including the Camera Cinemas here in the Bay Area. To view showtimes, visit their website at www.cameracinemas.com.

Thanks for reading, and enjoy the show!
Posted by Philip Castor at 7:34 PM