Hello again and welcome to the return of Phil Goes Bollywood! Now it has been a very long time since I've traveled to India via the amazing and astonishing Bollywood films that it exports! So for tonight I watched India's latest release: the action drama film AGNEEPATH. 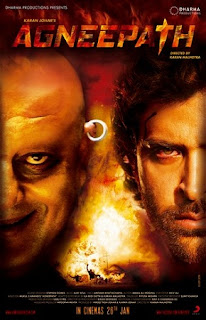 The film's about a young man named Vijay Chauhan (Hrithik Roshan), who's father was lynched before his eyes by the evil and sadistic Kaancha (Sanjay Dutt) fifteen years ago. He returns home to his small Indian village of Mandwa with a single goal of avenging his father's death.

The film is a retelling of the 1990 film of the same name and was directed by producer Hiroo Yash Johar's former assistant Karan Malhotra. Here, Malhotra does a superb job of showcasing his skills as a director; capturing in your face action sequences juxtaposed to raw, emotionally charges scenes of love, sorrow, and death. The script was written by Malhotra and his partner Ila Dutta Bedi, both whom weave a complex tale of revenge with such strong layering, tight storytelling, and interesting characters. Speaking of which...

Roshan (DHOMM 2) gives a great performance of the vengeance driven Vijay, who's character is very complex. One side is determined to do whatever it takes to avenge his father's death, even if it means he has to kill anyone who stands in his path. The other is very giving and caring, loves his mother and sister, and who's heart is captured by the love of his life Kaali, portrayed by the stunning Priyanka Chopra (RA.ONE). She is the Ying to Vijay's Yang; she is the light that brightens his darkened world. However, no one is as dark (and as evil) as the sadistic Kaancha. Dutt's performance is just out of this world. His Kaancha will make the hairs on your neck stand up! To be quite honest, he could give Bane from THE DARK KNIGHT RISES a run for his money in the twisted evil villain category. Just an outstanding performance by Dutt!

Since I've never seen the original version of AGNEEPATH, I cannot comment as to how this remakes compares or hold up to its predecessor. However, I think it would be unjust and unfair to compare the two. Both films represent a different point in history, and captures and reflects the Indian culture at that particular moment in time. 2012 is a lot different than 1990, but it's interesting to see how Indian films have evolved since then.

AGNEEPATH is a powerful, bloody, violent, brutal, and brilliant piece of Indian cinema! When you watch this film, ask yourself this one question: how far would you go to avenge the death of someone you love? This is one movie that you defiantly should see! Stop reading this and go see it now! Five out of five stars! Highly recommended!!


AGNEEPATH is still playing at select theaters, but the film was just recently released onto DVD. To purchase a copy, visit the Amazon website or the Dharama Productions website at www.dharma-production.com.

Thanks for reading, and enjoy the show!
Posted by Philip Castor at 10:11 PM