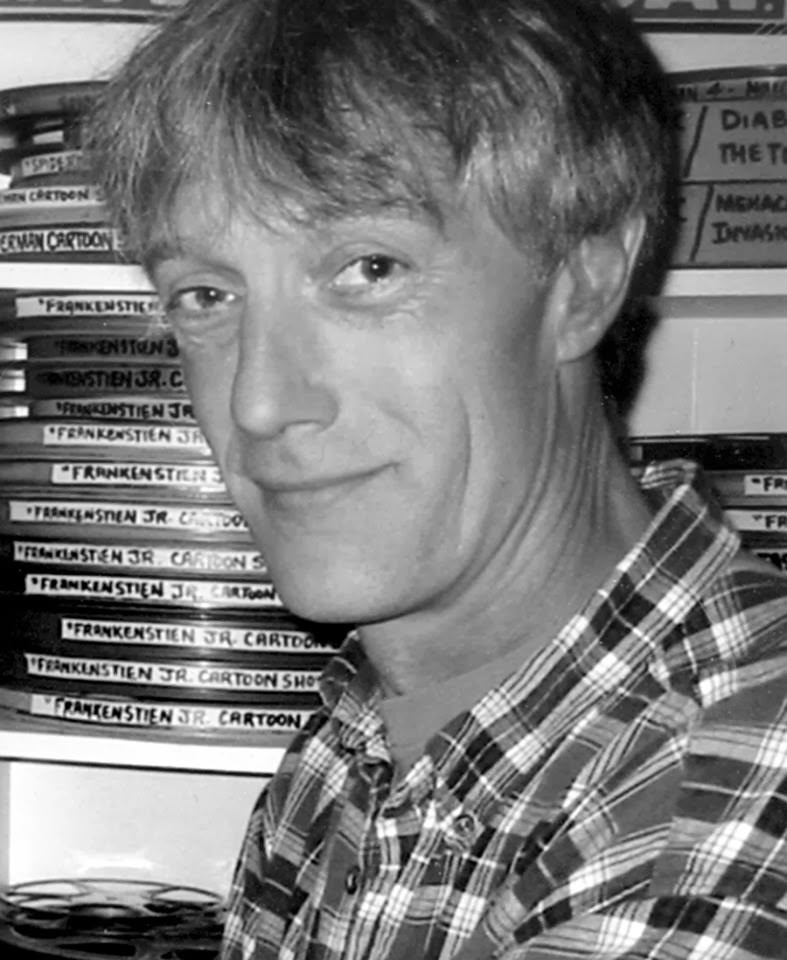 On January 2, 2014, while I was attending The Hollywood Show, I read a very shocking headline. Mike Vraney, the founder of Seattle's Something Weird Video, the home to the very best in exploitation cinema, had passed away at the age of 56 due to his long battle with lung cancer. To fans like myself, this was such a heavy blow to take. Fans of exploitation love SWS and Mike's passion to unearth these "sinematic" treasures for all of humanity to enjoy.

I was just completely shocked by this news. Still am actually. I owe an enormous debt to Mike and his company for exposing me to these great films for these past two decades. Nothing I can say can express just how terrible I feel about this. However, his wife, artist Lisa Petrucci, released the following statement on the day of Mike's passing. It is repeated here in its entirely:

We regret to tell you that Something Weird’s founder, Mike Vraney, passed away on January 2, 2014 after a long heroic battle with lung cancer. He was 56 years old, way too young to leave this planet. There was still so much Mike wanted to do in his life, so many films to be found, and adventures to be embarked upon.

This sad news may come as a shock to most of you. Mike was a very private person and didn’t want anyone, except his closest friends, family and colleagues, to know about his illness. He went through aggressive chemotherapy and radiation treatments for over a year, but sadly the cancer spread and cruelly took him from us.

Mike had a larger-than-life personality and a genuine enthusiasm for movies. Something Weird was his heart and soul, he was obsessive in his pursuit of tracking down the weirdest, wildest movies out there. And it wasn’t enough to find a few forgotten films, he was always in search of the movie motherload. (Making 370 two-hour volumes of Nudie Cuties loops is a good example of this. Who does that?! Mike Vraney!) Even as a child, Mike loved movies. During his teenage years, he worked at the Bel-Kirk Drive-In, and then later as a projectionist at the Green Parrot and Apple Theaters in Seattle. Then around 1990, Mike went in search of as many old, unusual, obscure, and lost low budget exploitation movies as he could, and preserved them for prosperity. Mike amassed thousands of these rare movies and had them transferred to video so that people could relive the good old days of going to the drive-in or grindhouse theater, in their very own home. We have him to thank for introducing fandom to the wonderful world of sexploitation sinema, rescuing it from the dark recesses of forgotten film vaults and defunct movie theatres.

Some of you may know that prior to Something Weird, Mike was involved in the early Seattle punk rock music scene. He was a partner in Modern Productions, the group who started Seattle’s seminal rock venue, The Showbox, in 1979. Mike then went on to manage such well-known bands as The Dead Kennedys, TSOL, and Seattle’s own The Accused. Mike always seemed to be at the forefront of whatever was happening and cool.

Mike’s second greatest passion in life was collecting old comics, vintage toys, movie memorabilia, and pop cultural ephemera. He enjoyed going to the swap meet and always had a magical ability for finding great stuff. But when he wasn’t working, collecting, or telling great stories, Mike spent quality time with his beloved family. Mike adored his wife and business partner, Lisa, and two (now young adult) children, Mark and Danielle. These three were the center of his universe, and his reason for getting up each and every morning.

The folks at Something Weird fully intend to honor Mike’s incredible legacy. Mike may be gone, but his remarkable achievements will live on. One of the happiest days of Mike’s life was when legendary David F. Friedman and Dan Sonney called him “the forty-first thief,” which to him was the ultimate compliment and recognition for his work. We’d like to think that Mike’s now hanging out with his old pals Dave and Dan, reminiscing and talking shop with Dwain Esper, Kroger Babb, Barry Mahon, Joe Sarno, Doris Wishman, Bob Cresse, Dale Berry, Michael Findlay and all the other exploiteers and smut peddlers who’ve gone to the great grindhouse in the sky.

Fans of Mike and of Something Weird Video are encouraged to visit the official Mike Vraney Memorial Tribute page on Facebook as well as to help make a donation to the Lung Cancer Alliance on his behalf. To Lisa Petrucci, Mark and Danielle Vraney, Kendall Bechtel, the Something Weird Video staff, and to the rest of his family and friends my deepest sympathies.

Thanks for reading, and rest in peace Mike!
Posted by Philip Castor at 6:24 PM