Phil sees THE WOLF OF WALL STREET at the Camera 7 Pruneyard-January 1, 2014

Happy New Years everybody!! While the majority of the world was hungover, I stepped out to the Camera 7 in the Pruneyard Shopping Center over in Campbell to see the newest film from the American auteur director Martin Scorsese. Now Mr. Scorsese has directed some of the greatest films of the last part of the 20th Century: MEAN STREETS, TAXI DRIVER, RAGING BULL, THE LAST WALTZ, THE COLOR OF MONEY, GOODFELLAS, and CASINO. In this millennium, he continued his amazing streak with GANGS OF NEW YORK, THE DEPARTED (the film that finally won him his first Oscar), SHUTTER ISLAND, and the amazing and wonderful family film HUGO. Now he returns to the silver screen with many have said to be his best film ever. And THE WOLF OF WALL STREET truly lives up to all the hype and the acclaim! 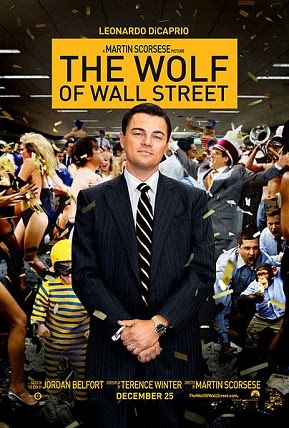 The film's synopsis: Based on the true story of Jordan Belfort, a Long Island penny stockbroker who served 36 months in prison for defrauding investors in a massive 1990s securities scam that involved widespread corruption on Wall Street and in the corporate banking world; from his rise to a wealthy stockbroker living the high life to his fall involving crime, corruption and the federal government.

First off, all I can say is WOW!! This was one funny, insane, crazy, sexy, provocative, dramatic films that I have ever seen!! But then again, this is a Scorsese film, so what did I expect? You know you're gonna see something different and unique. But this...this is an entirely different beast!

Now as you know, the movie is based on the real life exploits of Belfort, and the movie captures all of the good, the bad, and the ugly as well at the wild, the crazy, and the overindulgence! It's a miracle that this man not only survived it all, but that he remembers it all!! I mean all the events that we see in the film took place in the 80's and early 90's. That was more than twenty years ago people! I barely remember what I had for breakfast this morning!! I mean, keep this in mind when you're watching this film: this man can handle a lot of drugs!!

Bringing Belfort to life is none other then Leonardo DiCaprio, who once again shows us just how insanely talented he is. And let's face it; than man was outstanding in the movie! He just turn it on and he cracks it all the way up to 11. And he has to because to portray Belfort, he had to really go for it. Leaving the comfort zone way behind, DiCaprio depicts him as an egotistical, greedy, misogynistic, drug addict that you love to hate. But here's the catch: you don't really hate him! Rather, you are in awe of this crazy man! Look at him and one sees the American dream come to life. In real life Belfort went from having nothing to having everything then having nothing again. It's almost like a Greek tragedy, expect nobody dies and he gets to have lots of money and power, do massive amounts of cocaine and Quaaludes, live in a humongous mansion, have an hot trophy wife (Margot Robbie as his wife Naomi Lapaglia), and have control over Wall Street!

Oh, and i just want to say that I would do anything if I could have Margot Robbie as my wife! Good lawd she is so damn hot and sexy and gorgeous and sexy and sassy and sexy and beautiful sexy in the film! Did I mention she was sexy? Ok good, I was trying to make a point there.

Also, just a friendly FYI, if you are offended of the word "Fuck" then this isn't the movie for you. In fact, I recently read somewhere that the movie has the word "Fuck" more times than any other movie in film history! It has more cursing in its three hours running time than the entire series of The Sopranos!! Seriously, that is a lot of swearing!!

Now the film has received its fair share of backlash, mostly from critics and select groups that say it's very misogynistic towards women and showcases them as just sex objects and glorifies drug use. OK, let me just state the obvious: THE FILM IS TOLD FROM JORDON BELFORT'S POINT OF VIEW! THIS WAS HIS LIFE AND THIS IS WHAT HE DID AND THIS IS WHAT HAPPENED!! Period! Now if it was based on a story that was a collabration with those who were there, then this would be an entirely different movie. But alas, it is not. So therefore, it is all based on Belfort's experiences and his alone. This is how he lived. This is what happened. And this is how it's shown here.

Overall THE WOLF OF WALL STREET is an all-out, balls-to-the-wall, funny, sexy, and entertaining movie!! And it's one my picks for Best Film at the Oscars!! Martin Scorsese knows how to make movies and you should go out and see this right now!! I'm planning on see this film again! But first I need to pop a few Quaaludes and snort a couple of lines of Coke! 5 out of 5 stars!! Highly recommended!!


THE WOLF OF WALL STREET is currently playing in theaters nationwide, including the Camera Cinemas here in the Bay Area. To view showtimes, visit their website at www.cameracinemas.com.

Thanks for reading, and enjoy the show!
Posted by Philip Castor at 10:02 PM