Phil attends a special screening of TURN IT AROUND: THE STORY OF EAST BAY PUNK at the Camera 3 Cinemas - August 10, 2017

Guess who's back? That's right! After being away for over two years, I have come back home to San Jose! And what better way to celebrate my return than seeing a movie at my favorite theater: The Camera 3 in Downtown San Jose! But this wasn't your ordinary film, oh no. This was a documentary about the East Bay Punk scene that would transform music history forever. So let me tell you all about TURN IT AROUND: THE STORY OF EAST BAY PUNK and why I loved it so much! 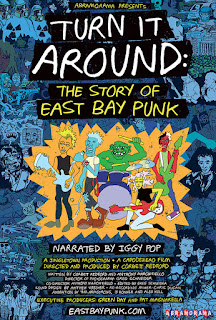 The film's official synopsis: Narrated by Iggy Pop, Turn it Around: The Story of East Bay Punk spans over 30 years of the California Bay Area’s punk music history with a central focus on the emergence of Berkeley's inspiring 924 Gilman Street music collective. The film is the definitive telling of this vibrant story, drawing from a wide variety of voices, featuring exclusive interviews with and the music of the most famous and infamous rock and punk bands in history, including Green Day, Metallica, Rancid, Dead Kennedys, and over 100 more interviews with artists and musicians from California’s East Bay punk music scene.

The film was nostalgic for me. I was there when the events in the film were unfolding. I remember hanging out with my friends listening to Operation Ivy's album. I was a huge fan of Lookout! Records and their bands like The Mr. T Experience, Groovie Ghoulies, The Donnas and The Queers. The label was also the home of a little band called Green Day, who would bring the East Bay Sound to the mainstream with their 1994 major label debut "Dookie."

It was interesting to reflect and look back while I was watching the documentary. The first thing that popped in my head first was, "Holy crap I'm old! I remember when all this was brand new!" Then I was thinking of all the young college kids that were in the theater with me. To them this is a history lesson. For me, we didn't know that this was going to become as big as did. We were just a bunch of dumb kids looking for something to do with our time. Forming bands, playing shows, starting fanzines, nobody thought that we were going to make history. None of my punk friends thought that we were going to become anything. In hindsight, we were doing something special and the filmmakers captured that youthful D.I.Y. spirit that drove us in creating this extraordinary scene.

The documentary was produced and directed by Corbett Redford and co-written by Redford and Anthony Marchitiello. These two gentlemen did their homework as they dug deep to bring to light the roots of the East Bay Punk scene, the rise of 924 Gilman Street and how it all came to be. Interviewing those who were their like Tim Armstrong, Larry Livermore, Matt Freeman, Dave Edwardson, Michelle Gonzales, Kamala Parks and the guys from Green Day (who helped executive produce the film along with Pat Magnarella), the film is so in-depth that its total running time is an astounding 157 minutes! And to have the legendary Iggy Pop to narrate the film, that's a punk rock rocker's dream come true right there!

Taking it one step further, the archival footage was amazing! To witness Operation Ivy in their glory days, to see a young Frank Portman front the Mr. T Experience and to see those Green Day kids playing to a backyard party made me scream for joy! It was wonderful to see all of this still exist and to have it the film was the icing on the cake! I was so happy I was grinning from ear to ear!

TURN IT AROUND: THE STORY OF EAST BAY PUNK is a punk fueled, groundbreaking and informative documentary that captures a magical period of time in music history; a lesson for those who wish to create their own scene and do something for themselves. I feel privileged to have witnessed it all first hand. I reflect on that period as the greatest time of my life. This scene, this world I was living in was new and open and anything was possible! This is one documentary that the whole world needs to see! 5 out of 5 stars!! Highly recommended!!


TURN IT AROUND: THE STORY OF EAST BAY PUNK is playing one more time at the Camera 3 in Downtown San Jose on Thursday, August 17th at 7:30pm. For tickets, visit the Camera 3's website at www.cameracinemas.com. To learn more about the film and to see if it will be playing at a theater near you, visit https://eastbaypunk.com.

Thanks for reading, and enjoy the show!
Posted by Philip Castor at 10:23 AM