Phil sees GHOST IN THE SHELL from Paramount Pictures - August 17, 2017

In 1995, the anime film GHOST IN THE SHELL was released to theaters and home video to world wide acclaim. It was the most visually stunning and complex anime to be released at that time. It has gone on to become one of the greatest anime films of all time, often times being compared to AKIRA in some conversations. Based on the internationally acclaimed Japanese Manga, "The Ghost in the Shell," the anime eventually caught the attention of Hollywood. Last year it was announced that Paramount Pictures were planning a big budget live adaptation of the classic property. The end result is GHOST IN THE SHELL, which was released to theaters this past spring and yours truly finally got around to seeing it. 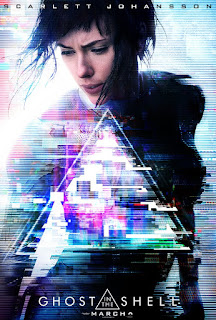 The film's official synopsis: In the near future, Major Motoko Kusanagi (Scarlett Johansson) is the first of her kind: A human saved from a terrible terrorist attack, who is cyber-enhanced to be a perfect soldier devoted to stopping the world's most dangerous criminals. When terrorism reaches a new level that includes the ability to hack into people's minds and control them, Major Kusanagi is uniquely qualified to stop it. As she prepares to face a new enemy, Major Kusanagi discovers that she has been lied to: her life was not saved, it was stolen. She will stop at nothing to recover her past, find out who did this to her and stop them before they do it to others.

So......yeah, this film. While I thoroughly enjoyed the cinematography and the special effects were gorgeous, I felt that it was just another lifeless, bloated Hollywood shit show.

Now I love Scarlett Johansson and I think she's a talented actress, but I felt like she was miscast in the role. Her performance felt flat for me and she didn't show a lot of range as Motoko. Granted, she was the subject of enormous controversy due to her being cast as the lead instead of casting an Japanese actress, which there is some merit in it. The source material is all Japanese based; the manga, the anime, which is regarded as one of the greatest and most influential anime film of all time. The only Japanese actor in the film is the legendary actor Takeshi Kitano and he doesn't speak of word of English in the film! That's how badass he is!

Director Rubert Sanders' previous film was the 2012 SNOW WHITE AND THE HUNTSMAN, which I didn't like very much. Now he is a really good director; his set-ups and compositions are nice looking, his storytelling is fluid and smooth, but as to why he picks these type of film projects is beyond me. So far his resume includes three short films and two Hollywood duds. Seriously Rubert, find something more worth while to do with your time.

GHOST IN THE SHELL is another dull, boring, lifeless, soulless, typical Hollywood schlockbuster that's easy on the eyes but is unquestionably forgettable! Not even Johansson and her skin colored outfit can save this film from being another shitty attempt of another Hollywood remake of a beloved Japanese film! 2 out of 5 stars! It's a rental at best!


GHOST IN THE SHELL is currently playing in theaters nationwide. Check your local listings to see if it's playing at a theater near you.

Thanks for reading, and enjoy the show!
Posted by Philip Castor at 11:56 AM