I love horror films. You've probably heard me mention that on more than one occasion. Can you blame me? Having being raised on the Bay Are show Creature Features and the birth of VHS and video stores, there was a mountain of horror films that I had access to watch! Now in the 21st Century, we know have awesome streaming services that provides us the convenience to watch them anytime we want. Plus, it's another platform for young up and coming filmmakers to showcase their films. A perfect example of this indie spirit is the film I saw on Shudder entitled LAKE NOWHERE and it was totally awesome! 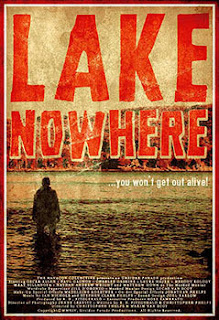 The film's official synopsis: From the vaults of the golden age of slasher films comes LAKE NOWHERE, a raucous, bloody romp which resurrects the thrill of gory midnight movies for an hour-long plunge into the depths of horror. Inspired by the dusty days of VHS, LAKE NOWHERE is preceded by original trailers & commercials, replicating the experience of watching a long lost bootleg tape. When a group of friends arrive at a desolate lakeside cabin, they are stalked and murdered by a Masked Maniac, whose lust for blood transcends our world. This age-old tale of senseless slaughter quickly spirals into the realm of supernatural horror and classic monster movies, as we learn the true power that lies within LAKE NOWHERE.

This was a very pleasant surprise! The film is a love letter to the days when VHS, video stores and cable stations ruled the world. Aesthetically pleasing, the film's appeal is that it looks as if it was recorded off of TV. We see a fake beer commercial (Wolf White Beer) and a cool fake trailer for an Italian giallo movie (HARVEST MAN). And as an added bonus to make it feel more authentic, we can see what was recorded over during the film! Yup, who didn't re-record and reuse the same VHS tape over and over again! This sick guy used to do that all the damn time!

The film itself is, "all thriller, no filler!" Clocking in at a lean, mean 51 minutes, directors Christopher Phelps and Maxim Van Scoy capture the look and feel of classic 80's slasher movies perfectly. Forgoing the standard character development and origin story, the movie contains the very basic ingredients: sex, blood and awesome kills! The visuals, combines with the radical synth soundtrack, the viewer is instantly transported back to the heydays of the slasher and VHS craze!

Since the release of GRINDHOUSE back in 2007, there has been a plethora of retro-styled movies that hearken back to the days when 42nd Street ruled New York. Once the VCR came into the mix, people began frequenting their local mom & pop video stores to rent these things called VHS tapes and watched them in the privacy of their home. The movie reminds me those good 'ole days of renting movies with my brother every weekend.

LAKE NOWHERE is a fun loving tribute to 1980's slasher movies, VHS tapes and late night cable channels!! This movie deserves to be seen by more people! So go support independent cinema and buy this movie so you can watch it over and over again! 5 out of 5 stars!! Highly recommended!!

LAKE NOWHERE is currently available on both Blu-Ray/DVD Combo and VOD. To purchase the movie as well as posters, visit the film's official website at www.welcometolakenowhere.com. The film is also streaming on Shudder. To view it, sign up on its website at www.shudder.com.

Thanks for reading, and enjoy the show!
Posted by Philip Castor at 5:33 PM