In 1990, I saw the TV movie series STEPHEN KING'S IT and it scared the hell out of me! Starring Harry Anderson, Annette O'Toole, Tim Reid, John Ritter, Richard Thomas and the iconic Tim Curry as the infamous Pennywise, the two-part mini series became a huge hit! Fast forward to this past weekend and I'm sitting inside the Cienlux Almaden Theater getting ready to watch the new terrifying version of King's book. And IT was scary as hell!! 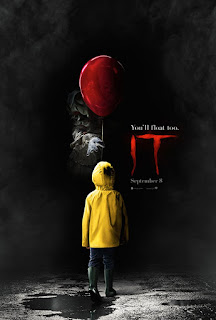 The film's official synopsis: In the Town of Derry, the local kids are disappearing one by one, leaving behind bloody remains. In a place known as 'The Barrens', a group of seven kids are united by their horrifying and strange encounters with an evil clown and their determination to kill It.

This was, without a doubt, a truly horrifying film! What makes the film work is the incredible cast that it contains. Stepping in Pennywise's shoes is Swedish born actor Bill Skarsgård (ATOMIC BLONDE, SIMPLE SIMON and TV shows Hemlock Grove and the upcoming Castle Rock). Skarsgård's performance is, without question, amazingly disturbing! His voice, his facial expressions, his mannerism, it's all there wrapped up in a delightful red balloon. I would like to go on record that his Pennywise rivals that of Curry's in the original. Yes friends, he's that damn good!!

Now you can't forget the outstanding child actors that appear in the film. Lead Jaeden Lieberher (ALOHA, MIDNIGHT SPECIAL, THE BOOK OF HENRY and the Showtime series Masters of Sex) portrays Bill Denbrough, the leader of group of kids known as "The Losers Club" that help look for Bill's baby brother Georgie (played by Jackson Robert Scott). His group of friends include fowl-mouthed Richie Tozier (Finn Wolfhard of Netflix's Stranger Things fame), the shy kid Ben Hanscom (Jeremy Ray Taylor from 42 and ANT-MAN), outsider Mike Hanlon (Chosen Jacobs from the TV series Hawaii Five-O), hypochondriac kid Eddie Kaspbrak (Jack Dylan Grazer from TALES OF HALLOWEEN, SCALES: MERMAIDS ARE REAL), Jewish Stanley Uris (Wyatt Oleff from the GUARDIAN OF THE GALAXY franchise) and tough girl and bad ass Beverly Marsh (Sophia Lillis), who could be Bill's first love. Together, these young actors have amazing on-screen chemistry with one another and all bring a lot to their respective characters: they're scared, they fight with one another, they have hang ups and they have to help each other to rise up against the evil Pennywise. Bravo to these extraordinary actors!!

Originally, the studio projected that the film would make $50million in its opening weekend, but they were so very wrong! The film ended up grossing a staggering $123.4 million, setting the records for largest opening weekend for both a September release and a horror film. As I am writing this, the film set another record, bringing in an additional $60 million in its second weekend! The film's 10-day domestic total has reached $218.7 million (which is unheard of for both a horror film and a R-rated film) and it looks like the film will continue to scare moviegoers long after it leaves the theaters!

IT is thus far both my favorite horror film and my favorite film of 2017!! If you haven't seen this movie yet, then you need to go to your local theater now and see this horror masterpiece!! The film is making cinematic history as I speak so why wouldn't you participate in it? 5 out of 5 stars!! Highly recommended!!


IT is currently playing in theaters nationwide, including at the Cinelux Theaters here in the Bay Area. To view showtimes, visit their website at www.cineluxtheatres.com.

Thanks for reading, and enjoy the show!
Posted by Philip Castor at 8:29 AM