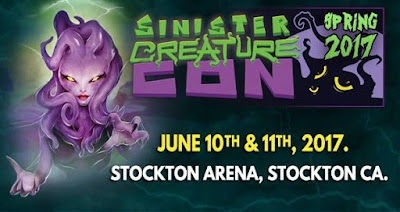 I normally don't like to talk about my personal life at all, but due to some personal setbacks and relocating back to my hometown of San Jose, one of the things that was put aside was my coverage of the SINISTER CREATURE CON that I attended back in June of this year. I had every intention on finishing this, but as I stated earlier, life has a way of throwing obstacles in your path. However, I am now able to share with you my amazing experience of this extraordinary event that hit the central valley. To all those I met at the con, sorry for the tardiness and hope to see you all again soon. Thanks for understanding and enjoy my post!

Now one of the advantages of being a popular film blogger is that I get to cover many film events throughout California: film festivals, conventions, special events, etc. It's been a long time since I've attended anything like this but this past June 10th and 11th, I had the honor and opportunity to cover the SINISTER CREATURE CON (Northern California's SFX, Mask, Makeup, & Horror Culture convention) at the Stockton Arena in Stockton, California. The convention is put on by the Sacramento Horror Film Festival and the also do The Rocky Horror Picture Show events at the Colonial Theatre with the Amber Sweets shadowcast. This was a big weekend for horror fans in the valley and yours truly was there to see it all!

There was a lot of celebrities in attendance that weekend, including the AMERICAN MARY Reunion panel featuring Katharine Isabelle, Tristan Risk and the Twisted Twins themselves, filmmakers Jen and Sylvia Soska. Another reunion taking place that weekend was the A NIGHTMARE ON ELM STREET 3: DREAM WARRIORS with Heather Langencamp, Ken Sagoes, Jennifer Rubin, Ira Heiden and Rodney Eastman. The convention also had ROCKY HORROR guests Barry Bostwick & Nell Campbell were there as well as filmmaker and creator of the PHANTASM franchise Don Coscarelli, actors Tom Atkins (Creepshow, Night of the Creeps, Halloween III), Daeg Faerch (Rob Zombie's Halloween), actresses Diane Franklin (Better Off Dead, Amityville II, TerrorVision), Brooke Theiss (Nightmare on Elm Street 4, Just the 10 of Us) and Amanda Wyss (Nightmare on Elm Street, Better Off Dead) just to name a few. Also Ve Neill, Walter Welsh, Alan Carnes, from Face/Off and Dutch Bihary Alison Kenyon from Skin Wars were there plus all the cool exhibitors, dealers, cosplayers and more!

This was the first horror convention in the Stockton area in a long time and I must say that this was an unprecedented success! There were so many celebrities, so many vendors, so many booths and so much fun was had by all! The next Sinister Creature Con will take place on October 14th and 15th, 2017 at the Scottish Rite Center in Sacramento, CA. Some of the celebrities attending the con will be Ted Raimi, Danielle Harris, Kevin Tenney, Uwe Boll, Lita from the WWE, Marky Ramone from the legendary punk band The Ramones, and so much more! To learn more about the convention and to purchase tickets, visit their website at www.sinistercreaturecon.com. To learn more about the Sacramento Horror Film Festival, visit their website at www.sachorrorfilmfest.com.

Thanks for reading, and enjoy the show!
Posted by Philip Castor at 4:21 PM