With the dismal returns from THE AMAZING SPIDER-MAN 2, Sony Pictures proved that they no longer had the ability to make any good Spider-Man movies. Then the unthinkable happened: Sony struck a deal with Marvel Studios and allowed our favorite wall crawler to become part of the Marvel Cinematic Universe. The result of this extraordinary deal lead to Spider-Man appearing in last year's summer blockbuster CAPTAIN AMERICA: CIVIL WAR. For this third incarnation, Marvel Studios recruited English born actor Tom Holland to don the red and blue spandex suit and both critics and fans were enthusiastic with this decision. They also returned Peter Parker to his comic book roots: that of a 15 year old high school student who has to deal with ordinary everyday teenage issues. Now Sony Pictures, Marvel Studios and Tom Holland return to theaters with SPIDER-MAN: HOMECOMING, which I finally got around to seeing this week! 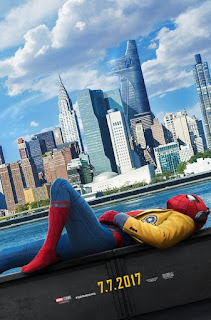 The film's official synopsis: A young Peter Parker/Spider-Man (Tom Holland), who made his sensational debut in CAPTAIN AMERICA: CIVIL WAR, begins to navigate his new found identity as the web-slinging super hero in SPIDER-MAN: HOMECOMING.  Thrilled by his experience with the Avengers, Peter returns home, where he lives with his Aunt May (Marisa Tomei), under the watchful eye of his new mentor Tony Stark (Robert Downey, Jr.). Peter tries to fall back into his normal daily routine – distracted by thoughts of proving himself to be more than just your friendly neighborhood Spider-Man – but when the Vulture (Michael Keaton) emerges as a new villain, everything that Peter holds most important will be threatened.

Fans have finally got the Spider-Man movie that we've all been waiting for! Tom Holland was absolutely perfect as our Peter Parker/Spider-Man. He was able to capture the character's personality perfectly. He looks and acts like a teenager; dealing with all the issues that a teenager faces, such as school, being picked on and put down, having a secret crush on the school's most popular girl and hanging out with his best friend. But add on his responsibilities as our Wall Crawler and his desire to become an Avenger and trying to thwart the super-villain Vulture. The casting of Holland has totally revived the franchise!

Speaking of the Vulture, who else can bring this beloved character to the big screen other than the great Michael Keaton? He was phenomenal as our antagonist and brings a lot of layers to his character; a criminal worthy of Spider-Man's attention but adds a touch of madness and evil that elevates him to one of the greatest villains in the Spidey Universe. Also by adding Downey as Peter's mentor and hero Tony Stark/Iron Man, Tony's lovable Happy Hogan (played once again by actor/director Jon Favreau) and Marisa Tomei as our new Aunt May, everything came together beautifully!

Credit also goes to Jon Watts, who did an incredible job of directing the film. Watts captured the look and spirit of the comic book while providing moviegoers a visually satisfying film complete with amazing set-ups and compositions, sweeping camera pans and nice close-ups to give us the ability to get in touch with the films' characters. This was Watts third feature film and the man knocked it out of the park! He has signed on to direct the sequel and I hope he'll be able to capture lightening twice!

SPIDER-MAN: HOMECOMING is the best Spider-Man film of all time!! I can't even get over on how much fun the movie was!! Sony, along with Marvel, have brought the character back to his comic book roots and fans are enthusiastic about this!! This is what we have been wanting and now we finally have it!! 5 out of 5 stars!! Highly recommended!!


SPIDER-MAN: HOMECOMING is now currently playing in theaters nationwide, including at the AMC Theaters here in the Bay Area. To view showtimes, visit their website at http://www.amctheatres.com.

Thanks for reading, and enjoy the show!
Posted by Philip Castor at 7:03 PM