Well, it's officially November folks! And you know what that means? Yup, a new Marvel movie was released! Pretty much whenever a new Marvel movie comes out it's a cause for celebration. It means another chapter of the MCU is open for us to explore, full of action and adventure! This time we're joining the God of Thunder as we bare witness of his journey in his third outing in THOR: RAGNAROK! 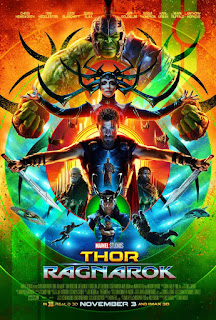 The film's official synopsis: Thor (Chris Hemsworth) is imprisoned on the other side of the universe without his mighty hammer and finds himself in a race against time to get back to Asgard to stop Ragnarok—the destruction of his homeworld and the end of Asgardian civilization—at the hands of an all-powerful new threat, the ruthless Hela (Cate Blanchett). But first he must survive a deadly gladiatorial contest that pits him against his former ally and fellow Avenger—the Incredible Hulk (Mark Ruffalo)!

The THOR franchise has been mostly serious, sprinkled with some humor. Focusing on the God of Thunder and his human companions as they stop God-like adversaries, the series has been played straight forward. However, with this film, the franchise has made a hilarious sharp left turn and is now played as a comedic action/adventure superhero flick!

Credit goes to screenwriters Eric Pearson, Craig Kyle and Christopher Yost for crafting a hysterical, smart and action packed script that still contains the mythical aspect of the character while injecting a generous amount of humor from the James Gunn GUARDIANS OF THE GALAXY series. In fact, during my viewing if the film, I thought that Gunn had written the script! It was fresh and exciting to see Thor portrayed in this kind of light, which adds a new layer to this famous comic book character. Add the incredibility talented director Taika Waititi (WHAT WE DO IN THE SHADOWS, BOY, EAGLE VS. SHARK) helming the project, and you have a Marvel that will rank in the Top 5 Marvel Films of all time!

Once again Chris Hemsworth and Tom Hiddleston return as Thor and Loki, respectively. There's nothing that I can say that I haven't said about them before. This is their fourth outing together on the big screen and, all I can say is that they're fantastic! The have the best on-screen chemistry within the MCU and I can't get enough of them. I can watch these two all day! Cate Blanchett's Hela is cunning, vicious and deadly and is easily one the greatest villains in the MCU. But she isn't without a sence of humor and she's got me to laugh a couple of times!

Mark Ruffalo is back as Bruce Banner, better known as the Incredible Hulk! We learn what happened to Banner at the end of AVENGERS: AGE OF ULTRON and what he's been up to since then. Like we saw in the first AVENGERS film, Thor and Hulk continue their brawl as they have one helluva slobberknocker of a battle! But when we see Bruce interact with Thor, we witness the beginning of a beautiful friendship! Hemsworth and Ruffalo are great actors and they play off one another amazingly. I hope we see more of them in future Marvel films!

Jeff Goldblum basicallly plays himself but in a fancy costume as the Grandmaster, but it's so much fun to watch. Tessa Thompson portrays Valkyrie, the long fabled warrior from days gone by. She is a interesting new character to the THOR franchise and Thompson is a wonderful addition to the cast. Also, we get an appearance of the great Anthony Hopkins as Thor and Loki's father King Odin and Benedict Cumberbatch returns as the mystical Doctor Strange. In fact, the bonus scene at the end of his film appears in this film, which is a nice way of tying the two films together, making it feel like the comic books.

Also, I have no idea on who thought about using Led Zepplin's "The Immigrant Song" in the movie but that was the most brilliant idea ever! The song appears at the very beginning of the film and at the third act's climax and it heightens the action and intensity of both of these scenes! Plus, it exposes the song and the band to a new generation of kids who may never have heard of Led Zepplin before. So whoever is the one responsible for that, good job buddy! Make sure you get a bonus for that!

Overall, THOR: RAGNAROCK is the best film in the series and is one of the funniest, action packed films within the MCU!! Fans will no doubt being seeing this film in the theaters over and over again! So head over to your local theater and see this bad boy on the big screen!! 5 out of 5 stars!! Highly recommended!!


THOR: RAGNAROCK is currently playing in theaters nationwide, including at the Cinelux Theaters here in the Bay Area. To view showtimes, visit their website at www.cineluxtheatres.com.

Thanks for reading, and enjoy the show!
Posted by Philip Castor at 12:44 PM