The DC Extended Universe been playing catch-up with the Marvel Cinematic Universe. With the exception of this past summer's blockbuster WONDER WOMAN, every single DCEU film has received every single kind of negative review you can think of. To be honest, I think it's a little unfair. I enjoyed the MAN OF STEEL. SUPERMAN V. BATMAN: DAWN OF JUSTICE was okay, but it was uneven and incoherent. And I liked SUICIDE SQUAD. Now Warner Bros. has released the latest chapter in the DCEU with JUSTICE LEAGUE. 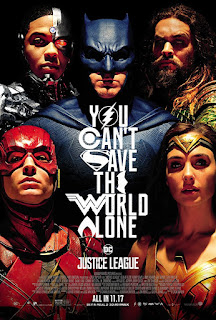 The film's official synopsis: Fueled by his restored faith in humanity and inspired by Superman's selfless act, Bruce Wayne enlists the help of his newfound ally, Diana Prince, to face an even greater enemy. Together, Batman and Wonder Woman work quickly to find and recruit a team of metahumans to stand against this newly awakened threat. But despite the formation of this unprecedented league of heroes-Batman, Wonder Woman, Aquaman, Cyborg and The Flash-it may already be too late to save the planet from an assault of catastrophic proportions.

The movie has already received mixed reviews from critics, which is really uncalled for. The film has a solid three-arc story, all the characters get their fair share of on-screen appearances, the main antagonist felt like a real threat and it had a lot action and humor. Plus the movie marks the return of the Last Son of Krypton (this is no big spoiler, it's already been mentions by several media outlets).

Both Ben Affleck and Gal Gadot reprise their roles as Bruce Wayne/Batman and Diana Prince/Wonder Woman. They really do look and sound like superheroes, even though word has it that Affleck might be stepping down as the Dark Knight, which is a real shame. He brought us a totally different Batman; one that has been fighting crime for over 20 years. He's the elder statesmen of the group and he's that one that initiated the formation of the Justice League. Gadot is wonderful and Wonder Woman (pun intended)! Also making their return are Amy Adams as Lois Lane and Diane Lane as Martha Kent and Jeremy Irons as Alfred Pennyworth. But this time, they are joined by some new faces!

Beefcake studmuffin Jason Momoa portrays Arthur Curry aka the Aquaman! Momoa is currently every woman's wet dream. Gaining immortality from the television show Game of Thrones, Momoa's Aquaman is funny but serious and kicks a lot of ass! Ezra Miller's Flash is the kid of the group. He's unsure of himself, lack self-confidence and is new to this whole "superhero" thing. But he see him grow as the film puts him is situations where he must man up and be the hero he is capable of being. Victor Stone aka Cyborg is brought to life by actor Ray Fisher. Moody, terrified of himself and his abilities but very cool under pressure, Fisher captures the character's personality, strengths and flaws perfectly!

And last, but not least, I have to mention the great J.K. Simmons as Police Commissioner James Gordon. Wow!! Even though he was in the film for about 5 minutes, he looked and sounded like the old Jim Gordon from the comics!! Simmons has the distinct honor of portraying two of the most iconic comic book characters on film: Gordon and J. Jonah Jameson from the original SPIDER-MAN Trilogy! How freaking cool is that?!?!

Director Zack Snyder, who's petty much been in charge of the DCEU, originally was hired to direct the film, but left the project after a year into it due to the tragic death of his daughter. Joss Whedon was brought on board oversee the remainder of post-production, including writing and directing additional  his own scenes for the film. Even though Snyder's name is listed as director, one has to wonder how much tampering did Whedon do? And with that being said, will fans ever see Snyder's version of the film? Hopefully, Warner Bros. Pictures will release both versions of the movie when it comes out on Blu-Ray!

In my humble opinion, JUSTICE LEAGUE is an action packed, entertaining comic book blockbuster!! Fans of the DC comic will enjoy seeing this big screen adaptation during this holiday season!! 4 1/2 out of 5 stars!! Highly recommended!!


JUSTICE LEAGUE is currently playing in 2D and 3D in theaters nationwide, including at the Cinelux Theaters here in the Bay Area. To view showtimes, visit their website at www.cineluxtheatres.com.

Thanks for reading, and enjoy the show!
Posted by Philip Castor at 5:15 PM