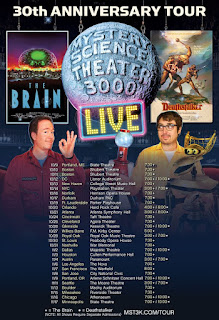 Hello to all of you in cyberspace! So for those who may not know this, but one of my favorite television shows from the 90's was Mystery Science Theater 3000. Created by comedian Joel Hodgson, the show takes place in the not-too-distant future where Joel Robinson (Hodgson) is held captive by Dr. Forrester (Trace Beaulieu) and TV's Frank (Frank Conniff), and forced to watch B-Grade movies on the Satellite of Love with the help of his robot friends: Cambot, Gypsy (Jim Mallon), Tom Servo (Kevin Murphy) and Crow T. Robot (Beaulieu). During the duration of the show's existence, the cast went through a series of hosts (Michael J. Nelson replaced Hodgson in the middle of season 5 and Bill Corbett replaced Beaulieu as the voice of Crow from season 8) and villains (Corbett, Murphy, and Mary Jo Pehl took over when Beaulieu and Conniff left), even moving to different channels (the show was originally on Comedy Central, then moved to the Sci-Fi Channel). After ten seasons, the show was cancelled, and the lights on the Satellite of Love went dark. Then in 2016 Joel resurrected the show, thanks in large part to a very highly successful Kickstarter campaign, and the show was made and picked up by Netflix. Now 30 years later, right before the launch of Season 12, Joel, the bots, and new host Jonah Ray went on tour to bring the magic of MST3K to the masses, and my girlfriend Stephanie and I got to attend the show here in Downtown San Jose!

The event was held at the historic City National Civic, which was built in 1934 and has held numerous concerts and musicals since. The show was sold out and the excitement level was at an all-time high. MST3K fans came from all around the Bay Area, some in costumes and some brought some awesome looking homemade puppets of Tom Servo. I had miss the tour here back in 2016, but I knew there was no way I'd miss them this time around. Having been a fan for decades, this was a dream come true. And when the lights finally dimmed at 7:30pm, the fun was about to begin!

Beginning with the show's theme song, Jonah Ray, Crow and Tom Servo came out to great the San Jose crowd, with Joel Hodgson joining them on-stage shortly after them. The gang was back together again, and for tonight's film, they chose to riff the 1987 Roger Corman produced cult classic DEATHSTALKER II!

The film's official synopsis: Deathstalker (John Terlesky) has a mission: to save the kingdom from the wicked grip of the immoral wizard Jerak and his queen Sultana. Together they have ruled the land by creating a controllable evil twin of the lovely Princess Evie (Monique Gabrielle). Capturing the real Princess Evie, Deathstalker must now return her to her rightful place of power — but the swordsman’s battle has just begun.

As stated previously, the film was produced by B-movie legend Roger Corman for his company Concorde/New Horizons. The film's star John Terlesky has appeared in numerous other projects like CHOPPING MALL, VALET GIRLS and THE ALLNIGHTER as well as TV series like Guns of Paradise, The Last Frontier and TV movies Battling for Baby, Bad Girls, and Voice from the Grave. He's gone to have a second career as a director, directing several TV episodes of The Blacklist,
Castle, Criminal Minds, Revenge, and Agents of S.H.I.E.L.D. Actress Monique Gabrielle was one of the most beautiful and popular Scream Queens from this era. Her resume includes several cult classics like AMAZON WOMEN ON THE MOON, EMMANUELLE 5, NOT OF THIS EARTH, THE RETURN OF SWAMP THING, HARD TO DIE and EVIL TOONS to name a few. Another B-movie actress appearing in the movie was the great Toni Naples as the female antagonist Sultana. Naples acted in other noteworthy cult films like CHOPPING MALL, TRANSYLVANIA TWIST, SORORITY HOUSE MASSACRE II, HARD TO DIE, DINOSAUR ISLAND and SORCERESS.

The movie was directed by Jim Wynorski, who's made a name for himself as one of the kings of the low-budget, B-movie scene. He's directed over 110 films alone, and include some of my all-time favorites like CHOPPING MALL, BIG BAD MAMA II, NOT OF THIS EARTH, SORORITY HOUSE MASSACRE II, HARD TO DIE, DINOSAUR ISLAND, MUNCHIE, and VAMPIRELLA, which were all produced by Roger Corman. In fact, many of his films were with Corman, who helped launch his filmmaking career. He also made a series of erotica thrillers that are still popular to this day. These titles include POINT OF SEDUCTION: BODY CHEMISTRY III, SINS OF DESIRE, VICTIM OF DESIRE, and BODY CHEMISTRY 4: FULL EXPOSURE.

Also known as DEATHSTALKER II: DUEL OF THE TITANS, the movie was released on home video on November 11, 1987 by New Horizons Home Video. This wasn't to be the last of the series, as Corman produced to more sequels, but they didn't have the magic, lunacy, and charm as the second installment.

This was such a fun date night for my girlfriend and I! And it's something I can finally check off my bucket list! To see a live MST3K show was a dream come true and you can all bet that I'll see it again if they go back on tour! As I am writing this, the new season has just dropped on Netflix. So if you are not familiar with the show, do yourself a favor and watch it now and prepare to have your funny bone tickled immensely!


Mystery Science Theater 3000: The Return is currently available to watch now on Netflix. To start your subscription, visit www.netflix.com. They also have a selection of episodes from past seasons as well. Select episodes are also available on DVD and boxsets from Shout! Factory. To purchase copies for yourself, visit their website at www.shoutfactory.com. And make sure you also the official Mystery Science Theater 3000 website at www.mst3k.com.

Thanks for reading, and keep circulating the URL!
Posted by Philip Castor at 10:48 AM