Welcome back horror hounds to Phil's Halloween Horror Watch! So, as some of you may have noticed, I didn't keep up with my blogging this month. Well, I have a very good reason for this. During the last weekend of October, my girlfriend and I moved into our new place! Yes, I was very exited about this! However, what made it so damn frustrating was that AT&T kept on flaking on setting up our Internet service! As a result, there was no way that I could write up my reviews even though I was still watching my movies. Now, to remedy this, I am going to post the rest of the movies that I watched, complete with the film's synopsis. Sit back, relax, and read on! 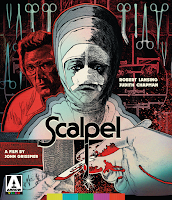 Day 22: SCALPEL (1976) from Arrow Video. The film's official synopsis: US television staple Robert Lansing (Star Trek, Alfred Hitchcock Presents, The Twilight Zone) stars as a deranged surgeon in this twisty-turny psychological thriller from Blood Rage director John Grissmer. In the film, Lansing plays Dr. Phillip Reynolds, a man whose daughter Heather (Judith Chapman, As the World Turns, General Hospital) has run away from home a year prior following the suspicious death of her boyfriend. When he happens across a young woman one night, her face beaten beyond recognition, the unhinged Reynolds sees his an opportunity to put his trusty scalpel to use – hatching a plan to “reconstruct” her face in the image of his missing daughter, and so claim her sizeable inheritance. 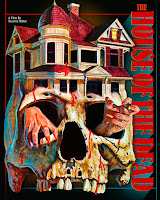 Day 24: HOUSE OF THE DEAD (aka ALIEN ZONE) () from Vinegar Syndrome. The film's official synopsis: Four tales of intrigue and horror await anyone brave enough to enter the HOUSE OF THE DEAD… When a philandering husband accidentally finds himself lost during a rainstorm, he’s taken in by an elderly mortician and is forced to learn the ghastly origins of four freshly arrived corpses: a scornful teacher whose students teach her a fatal lesson, an amateur filmmaker with a deadly muse, two dueling detectives attempting to solve a mysterious murder, and a bitter man whose arrogance costs him everything. 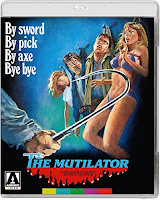 Day 25: THE MUTILATOR (1984) from Arrow Video. The film's official synopsis: When Ed receives a message from his father asking him to go and lock up the family’s beach condo for the winter, it seems like the perfect excuse for an alcohol-fueled few days away with his friends. But no sooner are the teens on the island than they find themselves stalked by a figure with an axe (and a hook, and an outboard motor) to grind.

Day 26: EVIL DEAD: THE MUSICAL at the San Jose Stage One Theater. The musical's synopsis:

Day 27: THE CHURCH (1981) from Scorpion Releasing. The film's official synopsis: In the middle of a modern city, an ancient evil is about to awaken! An elaborate cathedral that was once the site of a medieval massacre by crusading knights becomes a deadly trap for a group of visitors and staff when a sealed crypt is accidentally reopened. The laws of reality soon collapse as a nightmare takes hold and claims the lives of those within one by one, threatening to unleash a supernatural pestilence upon the world!

Day 28: BEHIND THE MASK: THE RISE OF LESLIE VERNON () from Scream Factory. The film's official synopsis: You know legendary maniacs Jason Voorhees, Michael Myers and Freddy Krueger. Now meet Leslie Vernon, the next great psycho-slasher. Nathan Baesel (Invasion) stars as Vernon, a good-natured killing machine who invites a documentary film crew to follow him as he reminisces with his murder mentor (Scott Wilson, The Walking Dead), evades his psychiatrist/nemesis (Robert Englund, A Nightmare On Elm Street), deconstructs Freudian symbolism, and meticulously plots his upcoming slaughter spree. But when the actual carnage begins, where do you draw the line between voyeuristic thrills, mythic evil, and good old-fashioned slasher movie mayhem?

Day 29: THE SLAYER (2006) from Arrow Video. The film's official synopsis: Two young couples set off to a secluded island for what promises to be a restful retreat. But the peace is short-lived: as a storm batters the island, troubled artist Kay begins to sense that a malevolent presence is here with them, stalking them at every turn. Is she losing her mind, or are her childhood nightmares of a demonic assailant coming to terrifying life?

Day 30: THE WITCHING SEASON (2015) from Scream Team Releasing. The film's official synopsis: Reminiscent of television shows like ‘Tales from the Darkside’ and ‘Tales from the Crypt’, The Witching Season is a five episode spine-tingling anthology of horror and suspense packed into one disc that delivers original tales of terror that capture the spirit of the Halloween season.

Day 31: TALES OF HALLOWEEN (2015) from Epic Pictures. The film's official synopsis: Named "the best horror anthology since Trick 'r Treat" by Fangoria and "among the best Halloween-themed horror movies ever made" by DailyDead, this critically acclaimed film weaves together ten chilling tales from horror's top directors. Ghosts, ghouls, monsters, and the devil delight in terrorizing unsuspecting residents of a suburban neighborhood on Halloween night.

And folks, there you have it! Another Halloween Horror Watch has come to a scary conclusion! I would like to thank all of you out there for reading my blog and I hope you've enjoyed learning about some of these horror films, cult classics, and modern day indie hits!

Thanks for reading, and Happy Halloween!
Posted by Philip Castor at 5:39 PM