Welcome to Day Ten of my Halloween Horror Watch! In 1978, writer/director John Carpenter and co-screenwriter Debra Hill unleashed one of the most terrifying horror films ever to theaters. Their $250,000 film would end up grossing more than $70 million worldwide, making it one of the most profitable indie films of all time. The movie became so popular, it ushered in the Slasher genre of the 1980's, garnered a legion of fans, and spawned a successful film franchise that includes seven sequels, and remake and sequel, with a new installment set to be released in a couple of weeks! And to celebrate the 40th anniversary of the film's release, CineLife Entertainment is teaming up with Carpenter to bring HALLOWEEN back to theaters this October! 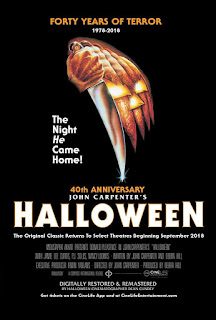 The film's official synopsis: On a cold Halloween night in 1963, six-year-old Michael Myers brutally murdered his 17-year-old sister, Judith. He was sentenced and locked away for fifteen years. But on October 30, 1978, while being transferred for a court date, a 21-year-old Michael Myers steals a car and escapes Smith’s Grove. He returns to his quiet hometown of Haddonfield, Illinois, where he looks for his next victims.

This is one of my all-time favorite horror films ever. The movie helped establish the "rules" for the slasher genre that would come charging in with the release of FRIDAY THE 13th just two years later. The film launched Jamie Lee Curtis' film career, and Carpenter became a legendary director within the horror genre.

The film has been discussed, written, dissected, reassembled, and worshiped since its release on October 25, 1978. There is nothing I can say about the film that hasn't already been said. The film can be classified as a "perfect" film. With Carpenter's beautiful directing, Curtis' down to earth performance, and thanks to Carpenter's simplistic soundtrack, there isn't one flaw to be found within the movie. If by chance you have never seen the film, you really need to see it! In fact, it is against the law to live your life without seeing this movie!

The movie has been released in various formats over the years. It was originally released on VHS by Media Entertainment, then by Anchor Bay Entertainment in a variety of ways and formats, including special edition VHS boxsets, DVD, and Blu-Ray. Just recently,  Lionsgate Home Entertainment released the movie in a Ultra HD Blu-ray and Blu-ray edition for the film's 40th anniversary.

HALLOWEEN is one of the greatest horror films of all time! Period! There is no discussion, no debate, and no questioning about it's place in not only horror film history, but in cinema history! The landscape of the horror genre wouldn't look the same without this film! It is required viewing, no matter what time it is within the calendar year! And with it available to watch on Blu-Ray, DVD, local television stations, VOD and various streaming platforms, there is no reason as to why you haven't watched it yet. This October, make a date with Michael Myers, and don't forget to hide your knives. 5 out of 5 stars!! Highly recommended!!


HALLOWEEN is playing in select theaters nationwide this October, courtesy of CineLife Entertainment. To see if it's playing in a town and theater near you, please visit their website at www.cinelifeentertainment.com.

Thanks for reading, and enjoy the horror!
Posted by Philip Castor at 4:05 PM