Phil counts down to the 14th Annual ANOTHER HOLE IN THE HEAD FILMFEST at the New People Cinema in Japantown, San Francisco October 25th - November 8th, 2017 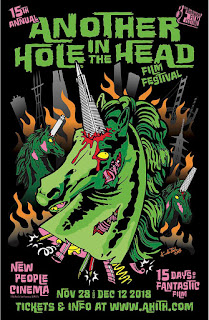 One of the aspects I love about living here in the Bay Area is all the awesome films festivals that are held here. One of these is the upcoming 15th Annual ANOTHER HOLE IN THE HEAD FILM FESTIVAL, which is presented by SF IndieFest and will be held at the New People Cinema, located in Japantown, San Francisco. From November 28th through December 15th, 2018, fans of horror, sci-fi and fantasy genres can witness a total of 29 films and 94 short films during the festival's 15-day run!

The festival kicks off with the its Opening Night's Film THE GOD INSIDE MY EAR. The directorial debut from write/director Joe Badon, the film is, "a challenging yet wholly accessible and satisfying blend of surrealism, horror, psychological thriller, and science fiction. Imagine Repulsion by way of David Lynch and Luis Bunuel, with some Douglas Sirk high melodrama for good measure, and you start to sense what you are in for.  It is also a marvel of independent filmmaking, and its terrific production values belie that it was made in 13 days for a mere $8,000." Last year's Opening Night Film MOHAWK was distributed by Dark Sky Films and has went on to great acclaim, so don't be surprised if THE GOD INSIDE MY EAR will repeat this trend!

There are plenty of independent film screenings and events at the festival this year, including the "based on true events" sci-fi film THE PHOENIX INCIDENT on November 30th at 7pm, the documentary SURVIVAL OF THE FILM FREAKS, which focuses on, "how technology has changed the way we define and consume cult cinema." The documentary will be screened on Saturday, December 1st at 5pm. Another film that you all should definitely see is the modern day, women-in-prison masterpiece AMAZON HOT BOX, playing on Monday, December 3rd at 7pm. This film has a special place in my heart because I donated to its original Kickstarter and I received the limited edition signed Blu-Ray, but still, go watch this movie! Another interesting documentary that will be screened at the festival is INDUSTRIAL ACCIDENT: THE STORY OF WAX TRAX! RECORDS, chronicling. "Wax Trax! Records began in a tiny storefront in Denver Co in the mid 70s. At the center of Wax Trax! are two music-obsessed men and their taboo love affair." Due to popular interest, the festival will be having to screenings: Friday, December 7th and Wednesday, December 12th, both start at 7pm.

The festival will also be featuring some very cool and fascinating events, like the incredible EDDIE KING DOUBLE FEATURE event that consists of DEAD FALL and ARSENAL on Thursday, November 29th at7pm and 9pm respectively. There's also the WALT DISNEY'S FANTASIA LIVE MOVIE RE-SCORE featuring the return of Firmament on November 28th at 9pm and again on Sunday, December 9th at 9pm. And for all you deadites, there's EVIL DEAD REVISION on Thursday, December 6th at 9pm. Franchise fan Jorge Torres-Torres took all three films, re-edited them to a scant 72-minute black and white video, filled with all the fun and gore that fans love! There's also the free event entitled AHITH IN CYBERIA VR that, "will gather an audience from around the world to a virtual screening room on the SANSAR platform for one day of short film screenings with live Q&A’s." Then on Saturday, December 8th at 7pm, the supernatural thriller REBORN will be screened and in attendance will be the film's star and legendary genre actress Barbara Crampton!

Closing out the festival will be the US Premiere screening RONDO, a dark comedy thriller that's about, "a kinky sex proposition devolves into a chain of murder, sex, revenge. And more murder." Written and directed by Drew Barnhardt and staring G.C. Clark, Ketrick 'Jazz' Copeland, and Reggie De Morton, the film starts at 7pm on November 9th.

There's so much happening at the festival, it'll take another post to list them all!! So what are you waiting for?  Mark the festival's date on your calendar and come out to the city for some amazing works of art! Individual tickets are $20 online and at the door. All-inclusive festival passes will be priced at $150, which includes all the films and special events. For the full festival schedule, visit the Another Hole in the Head's official website at www.ahith.com.

Thanks for reading, and enjoy the show!
Posted by Philip Castor at 7:18 PM