Hell again readers and welcome back to another thrilling installment of Phil's Shudder Picks! Today's film was just added to the streaming service a couple of days ago, and it's a film that I've been hearing about for a while now. It's a documentary about one of the most underrated filmmakers of all time. Now I've been a fan of his for years, and when I first heard about the documentary, I was super excited to see it. He was long overdue to have a film about himself, as he has countless stories to tell and a large fanbase, who are very loyal to him and his work. So let's no wait another minute, and let me tell you all about the documentary KING COHEN: THE WILD WORLD OF FILMMAKER LARRY COHEN. 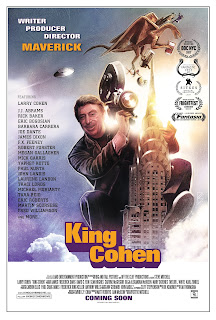 The film's official synopsis: Buckle up for KING COHEN, the true story of writer, producer, director, creator and all-around maverick, Larry Cohen (BLACK CAESAR, GOD TOLD ME TO, Q: THE WINGED SERPENT, THE STUFF). Told through compelling live interviews, stills and film/TV clips, the people who helped fulfill his vision, and industry icons such as Martin Scorsese, John Landis, Michael Moriarty, Fred Williamson, Yaphet Kotto and many more, including Larry himself, bring one-of-a-kind insight into the work, process and legacy of a true American film auteur. Few can boast of a career as remarkable or prolific, spanning more than 50 years of entertaining audiences worldwide!

The first Larry Cohen film I saw was the 1974 fright flick IT'S ALIVE, and I saw it on cable when I was about nine or ten years old.
Posted by Philip Castor at 3:54 PM