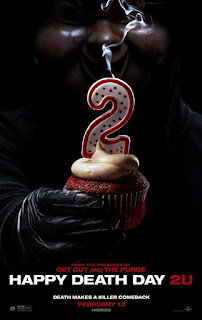 When I first saw HAPPY DEATH DAY back in October of 2017, it became one of my favorite horror films that year. It boasted a clever script, fantastic acting from its cast, especially from its lead actress Jessica Rothe, and was awesomely directed by Scott Lobdell. The film went on to dominate the boxoffice, as both horror fans and moviegoers alike helped the film earn a whopping $56.3 million worldwide! Blumhouse, the production company that helped produce the movie, announced last year that they were planning a sequel to capitalize on the fandom of the first film. Low and behold, I found myself making my way over to the Cinelux Almaden Cafe & Lounge to see the latest installment of the series entitled HAPPY DEATH DAY 2U!

The film's official synopsis: Having survived the farcical but utterly life-threatening events HAPPY DEATH DAY, the feisty sorority sister, Tree Gelbman, finds herself in the same college dorm, thankful to be alive. However, this time, it's Carter's roommate, Ryan, who claims that he is reliving the same paradoxical day over and over again, as a mysterious paranoid killer in a single-toothed baby-faced mask with a big kitchen knife has made a habit of murdering him. Under those circumstances, a valiant but vain attempt to face the challenge, once more, will send Tree back to square one, trapped in an all too familiar and blood-drenched time loop. How many deaths separate Tree from a truly happy birthday?

I must give credit to the filmmakers, the cast, and crew: They went there! They went there, took pictures, and came back! Writer/director Christopher Landon took the sequel in a totally different direction, one that I did not see coming, which was very clever on his part. Landon is no stranger to the horror genre, having helming films like PARANORMAL ACTIVITY: THE MARKED ONES and SCOUTS GUIDE TO THE ZOMBIE APOCALYPSE and was the writer for DISTURBIA, VIRAL, SCOUTS GUIDE TO THE ZOMBIE APOCALYPSE and PARANORMAL ACTIVITY 2-4 and the THE MARKED ONES. Landon 's script borrows more from films like BACK TO THE FUTURE: PART II (which was referenced in the film, like GROUNDHOG'S DAY in the first film) and leans more towards the sci-fi/comedy genre than the slasher genre. However, I found this quiet refreshing! It's no different than what Sam Raimi did with 1987's EVIL DEAD II: DEAD BY DAWN and his 1993 cult hit ARMY OF DARKNESS. It's this progression that really made me sit up and take notice. Landon is one evil genius and I'm hoping that he gets to make the third film of this new series!

Our heroine Tree Gelbman is portrayed by the very talented Jessica Rothe. Tree isn't your typical sorority rich bitch. There's a reason she's a self-absorbed, snotty and downright rude; she's been through a lot and throughout the movie she evolves and changes, but still has that cunning and at the end, she becomes that bad ass final girl horror fans have grown to love. Her companion on this never-ending day trip is Carter Davis, played by Israel Broussard. Both have great on-screen chemistry and it was great to see their characters interact with one another, especially Tree remembering everything and Carter always is the same person but not in the same sense as the previous day.

As I mentioned earlier, I hope that Blumhouse gets Landon to make the next sequel, and let's face it, if this film blows up like the first one did, then it's a given! Also, this has nothing to do with the film's after credit scene that sets this up for a sequel. But, it's tongue-in-check and it might have been taken seriously, but you never know! It could very well become a reality in the very near future!

HAPPY DEATH DAY 2U is a clever, funny, and entertaining sci-fi/horror/comedy/thriller that will keep you guessing all the way to the final scenes!! Don't give this movie a pass! Go to your local theater, grab some popcorn, snacks and drinks, and then sit back and have a good time!! 4 1/2 out 5 stars!! Highly recommended!!


HAPPY DEATH DAY is currently playing in theaters nationwide, including at the Cinelux Theaters here in the Bay Area. To view showtimes, visit their website at www.cineluxtheatres.com.

Thanks for reading, and enjoy the screaming!
Posted by Philip Castor at 8:00 PM