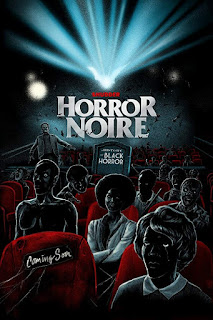 February is Black History Month, and it is a time we celebrate the extraordinary achievements, accomplishments, and contributions made by African Americans. It's also a month that we reflect on the past; how these individuals and ancestors were mistreated, exploited, and ridiculed. One of these areas that African Americans were blantedly stereotyped was in the cinemas. Since its inception, movies have portrayed them as less than human; a bigoted slant that they were forced to see on the silver screen. This is true even in the horror genre; as they subjected to the same stereotypes and is usually the first to fall victim. But over the years, fans of the genre have witnessed a resurgence of new horror films told from a black perspective, courtesy of black filmmakers who have the courage and talent to tell their stories to a mass audience. The first of its kind, HORROR NOIRE: A HISTORY OF BLACK HORROR is a documentary about a subject that has long been overlooked, and quiet frankly, needed to be told!

The film's official synopsis: Delving into a century of genre films that by turns utilized, caricatured, exploited, sidelined, and finally embraced them, Horror Noire traces the untold history of Black Americans in Hollywood through their connection to the horror genre. Adapting Robin Means Coleman’s seminal book, HORROR NOIRE: A HISTORY OF BLACK HORROR will present the living and the dead, using new and archival interviews from scholars and creators; the voices who survived the genre’s past trends, to those shaping its future. A SHUDDER ORIGINAL.

Based on the 2011 book of the same name by Robin R. Means Coleman, PhD., the film examines how African Americans were portrayed in American films, and the racist stereotypes that Hollywood made into the norm. Starting with the 1915 film BIRTH OF A NATION, the documentary goes through the decades leading up to the transformative horror film NIGHT OF THE LIVING DEAD, which was released in 1968. Directed by the late, great George A. Romero, the movie shattered the norm by having a black actor as its lead and hero, giving orders to the white people in the house that they are all hiding in, killing white zombies, and then being killed at the end, The movie was made during the height of the civil rights movement, and was released right after the assignation of Dr. Martin Luther King, Jr.

HORROR NOIRE: A HISTORY OF BLACK HORROR is one of the best documentaries of 2019, period!! Insightful, informative, and eye opening, the movie shines a light on a topic that has been living in the shadows for far too long! In this day and age, it's a reminder that history does repeat itself, if we don't learn from it. With the current administration, the climate of America is one of fear, racism, and idiocy. To combat these, we possess education, enlightenment, and to keep us moving forward! The same came be said in Hollywood, and in the horror genre! If this doesn't inspire you, then nothing will! It's now time more than ever for new voices to be heard, and the horror community welcomes it with open arms!! 5 out of 5 stars!! Highly recommended!!


HORROR NOIRE: A HISTORY OF BLACK HORROR is now streaming exclusively on Shudder. To view it, sign up on its website at www.shudder.com.

Thanks for reading, and enjoy the education!
Posted by Philip Castor at 8:00 PM