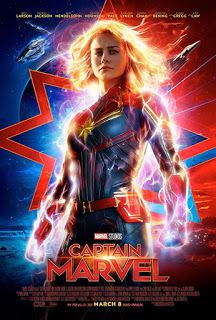 Hello again folks! As you may have noticed, I went and saw CAPTAIN MARVEL again! But this time, I didn't see it alone! I finished up my day at work early, so I had a cool idea. I texted my girlfriend that I was finishing up work early, and we should go out on an afternoon date! Our son was at school, so I suggested to see CAPTAIN MARVEL over at the Pruneyard Cinemas Dine-In, and we can use our gift card that we received at Christmas! She was down with this date, so I went back home and picked her up, and we made our way to the theaters!

We picked up some cool seats, and remember, these are the leather reclining seats! Oh they were soooo comfty! And, we ordered lunch from The Cedar Room, where they prepared our delicious food and was brought to us! Now that's service!

As for the movie itself, I enjoyed it the second time around! For my girlfriend, she absolutely loved it! This was the third MCU film that she's seen with me in the theaters! So right there is a cause for celebration! Since we've been together, I've had her see AVENGERS: INFINITY WAR and ANT-MAN AND THE WASP in the cinemas, and I've been trying to get her caught up with the other titles on Blu-Ray. Overall, it was a great daytime date!

CAPTAIN MARVEL is currently playing in theaters in 2D, 3D, and IMAX nationwide,
including at the Pruneyard Cinemas Dine-In here in the Bay Area. To view showtimes, visit their website at www.pruneyardcinemas.com.

Thanks for reading, and enjoy the show!
Posted by Philip Castor at 8:08 PM