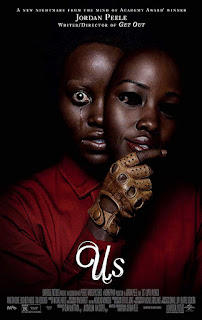 Jordon Peele made a huge impact in the horror genre with his 2017 directorial debut film GET OUT. Addressing racial, political, and social commentary, the film was herald as one of the most polarizing films in last few decades, and becoming an Academy Award winning movie for Best Original Screenplay. Soon, Peele was all over the media, news, and online platforms discussing his debut feature, what was the inspiration for it, and, most importantly, what would be his next project! This past weekend, moviegoers all over flocked to their local theater to witness the latest creation from this talented filmmaker, and I was one of those people. It was at the Cinelux Almaden Café & Lounge where I saw the slow burn US from Universal Pictures.

The film's official synopsis: Haunted by an unexplainable and unresolved trauma from her past and compounded by a string of eerie coincidences, Adelaide (Lupita Nyong'o) feels her paranoia elevate to high-alert as she grows increasingly certain that something bad is going to befall her family: husband, Gabe (Black Panther’s Winston Duke), and their two children (Shahadi Wright Joseph, Evan Alex). After spending a tense beach day with their friends, the Tylers (Emmy winner Elisabeth Moss, Tim Heidecker, Cali Sheldon, Noelle Sheldon), Adelaide and her family return to their vacation home. When darkness falls, the Wilsons discover the silhouette of four figures holding hands as they stand in the driveway. US pits an endearing American family against a terrifying and uncanny opponent: doppelgängers of themselves.

Words cannot describe just how much I enjoyed the movie! Once again, Peele demonstrates that he is one of the most talented filmmakers within the genre, and a new voice in modern day horror. While watching his sophomore feature, I found myself comparing him to the late, great George Romero; combining social commentary with avant garde storytelling. His camera literally grabs the viewers by the throat and drags them into the movie.

As I am writing this review, the film has just been dominating at the box office! Right at this moment, the movie has earned an overwhelming $128.2 million here in the states and Canada, and another $46.3 million in other countries, grossing a worldwide total of $174.5 million! Remember, the budget was only $20 million!! That is some serious box office business!! But it also means that there is an audience for horror films with minority casts! This is something that will no doubt change the landscape for not only horror films, but for all Hollywood movies to come!

US is one of the very best horror films of 2019 thus far!! The bar has been set to insurmountable heights that it's, again, going to be very difficult to top this movie! Now, there are a plethora of horror films being released this year, so my opinion might change, however, nothing will take away from the emotional experience I had watching Peele's latest masterpiece in my local theater! 5 out of 5 stars!! Highly recommended!!

US is currently playing in theaters nationwide, including at the Cinelux Theaters here in the Bay Area. To view showtimes, visit their website at www.cineluxtheatres.com.

Thanks for reading, and enjoy the show!
Posted by Philip Castor at 7:44 PM