Phil attends the first midnight screening of THE ROCKY HORROR PICTURE SHOW of 2013 at the Camera 3-January 5, 2013 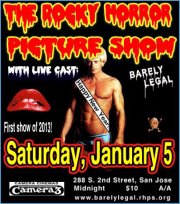 This past Saturday night I one again did the Time Warp again over at the midnight screening of THE ROCKY HORROR PICTURE SHOW at the Camera 3 in Downtown San Jose! The show is presented by the Camera Cinemas and by Psycho Donuts and it features the cast of Barely Legal Productions, who have been carrying the ROCKY torch here in the Bay Area for the past 17 years! What made this show even more fun was that my best friend Dave along with his girlfriend Christine and her daughter Katelyn came out to join in on the fun!

What better way to ring in the new year with a midnight screening of ROCKY, which was Barely Legal's first show for 2013. The cast and crew once again did a wonderful job! Every time I attend these shows, the crowds get bigger and bigger, plus more and more "virgins" are attending these shows, which means the ROCKY virus is spreading to a whole new generation of kids. This makes me very happy, because it means that this midnight tradition, and the film, will be entertaining people for years to come. This is their mission: to keep the legacy of THE ROCKY HORROR PICTURE SHOW alive and well, and to make sure audiences have the best time of their lives at their shows. I always have a blast, and all my friends that I've been taking have all had fun and all have come back several times over.

THE ROCKY HORROR PICTURE SHOW is the alpha and omega of midnight movie; a cult classic that has no real equal. The film is in a class all by itself, far ahead of its time. The film was a bomb when it was first released. Now, it is part of the Library of Congress' National Film Registry. The film's message of "Don't dream it. Be it." has had a major influence on those who are different, the outcasts if you will. It resonates and has inspired many who felt that they didn't belong. Artists, punks, gays, lesbians, movie maniacs, college students, and everyone in between. The reason we love this film for more than just its obvious and fabulous over-the-top outrageousness. It speaks to us all to not give up on hope. To not give up on ourselves and to keep following our passions in life! Also the film is just one of the best films ever made!

So another great midnight screening has come and gone. But don't fret, the Barely Legal crew will be back in San Jose next month. They put on shows all over Northern California, so no matter where you live, there will be a show near you. To learn more about future shows, and how you can become a cast member, visit their website at barelylegal.rhps.org.

Thanks for reading, and enjoy the show!
Posted by Philip Castor at 9:12 PM