I woke up early Sunday morning because I was going to see a film that was about three hours long! The film has also garnered eight Oscar nominations! So I made my way over to the Camera 7 in the Pruneyard to see the film LES MISERABLES, which is based on the musical of the same name by Alain Boublil and Claude-Michel Schönberg which is in turn based on Les Misérables, the 1862 French novel by Victor Hugo. 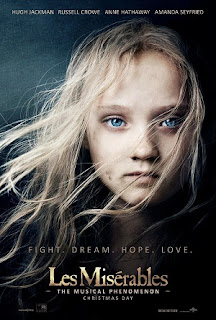 Set against the backdrop of 19th-century France, this motion-picture adaptation of the beloved global stage sensation tells an enthralling story of broken dreams and unrequited love, passion, sacrifice and redemption--a timeless testament to the survival of the human spirit. After he breaks parole, ex-prisoner Jean Valjean (Hugh Jackman) is hunted for decades by the ruthless policeman Javert (Russell Crowe). When Valjean agrees to care for factory worker Fantine's (Anne Hathaway) young daughter, Cosette (first by Isabelle Allen as a child, then by Amanda Seyfried), their lives change forever.

I have never seen the play before, but I did the book back in high school. However at that point in my life, my world consisted of horror and B-movies, comic books, and punk/indie rock. Looking back it's a wonder I even grew up! Being older, I now appreciate the arts more; frequenting the San Jose Museum of Art, seeing stage productions throughout Downtown San Jose, and catching on reading the classics by John Steinbeck, Ernest Hemingway, and Jack Kerouac. I appreciate that arts now more than ever and I wish I had seen the stage production of this film!

Witnessing the film in a darkened movie theater was like experiencing an act of God or something to that extent. I have never seen a film of this magnitude; with its lavish production values, a magnificent ensemble cast, breathtaking directing, and beautiful songs, it's no wonder that film has been nominated for eight Academy Awards!

If I may be so bold as to jettison my usual tried and true critique and allow me to just say this: LES MISERABLES is my favorite film of 2013 and is one of the greatest films I have ever seen in my entire life!! Words cannot do this film justice! YOU HAVE TO SEE THIS FILM!! In fact, stop reading this review right now and go see it!! 5 out of 5 stars!! Highly recommended!!


LES MISERABLES is currently playing in theaters nationwide, including at the Camera Cinemas here in the Bay Area. To view showtimes, visit their website at www.cameracinemas.com.

Thanks for reading, and enjoy the show!
Posted by Philip Castor at 11:25 PM