From the early 1940s to the late 1950s, a new film genre arose from the ashes of World War II. These films tackled crime and were filled with vice, femme fatales, and gangsters. This genre was called Film Noir and it laid the foundation for all crime thrillers and dramas to follow. Now in the 21st century, Hollywood still refers back to these classics for inspiration. The new Warner Brother's film GANGSTER SQUAD tips its hat to film noir movies of the past while maintaining modern filmmaking and sensibility. 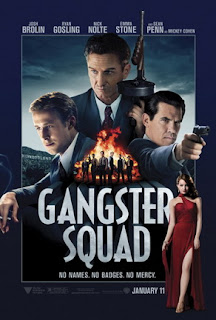 The film takes place in 1949, post-WWII Los Angeles and Brooklyn born mob boss Mickey Cohen (Sean Penn) has become the most powerful figure in the California criminal underworld, and intends to continue to expand his criminal enterprise across the Western United States, forcing out his rivals in Chicago. In order to stop him, Police Chief Parker (Nick Nolte) recruits gung-ho Sergeant John O'Mara (Josh Brolin) with creating a secret group of unorthodox officers to bring Cohen down by any means necessary. Soon, O'Mara and his squad Wooters (Ryan Gosling), Harris (Anthony Mackie), Kennard (Robert Patrick), Ramirez (Michael Pena), and Keeler (Giovanni Ribisi) begin destroying Cohen's empire. But when Wooters falls for Cohen's girl Grace (Emma Stone) and he discovers their identities, the squad must prepare for a war that will determine the fate of the city.

The film is loosely based on the story of LAPD officers and detectives forming a group called the "Gangster Squad unit" who attempt to keep Los Angeles safe from Mickey Cohen and his gang during the 1940s and '50s.

Director Ruben Fleischer is mostly known for directing comedies such as ZOMBIELAND and 30 MINUTES OR LESS. With this his third film, Fleischer tries to break out of his norm and attempt to stretch his wings out as a director. While some of criticized the film and its director, this reviewer found it very enjoyable. It was well directed, well paced with some great action sequences. The film is filled with car chases, shoot outs, Tommy guns, hard boiled detectives, sexy dames, and crime. Fleischer does a fine job balancing the action and the story as well as creating that 1940s feel. The movie really has that film noir sense to it.

Once again Sean Penn gives an outstanding performance as the ruthless gangster Mickey Cohen. Penn channels the heavies of film noir past and is completely lost in his role. Josh Brolin is equally intimidating. Though he's on the side of law, you won't want to get on his bad side. The last time we saw Ryan Gosling and Emma Stone snuggle on screen was in the 2011 film CRAZY STUPID LOVE. Here the chemistry is slightly off. Their acting in the movie is fine, but I felt their relationship was under developed and could've been more fleshed out.

While watching the film, the only thought that was running in my mind was, " I wish this was filmed in black and white." While it was fantastic to see the film in color, but given the film's setting and the genre, it would have been a real treat to have watched it in black and white.

The movie's first trailer was released on May 9, 2012, with the film to be released September 7, 2012. However, in the wake of the mass shooting at a movie theater in Aurora, Colorado on July 20, the trailer was pulled from theaters and television. It was also removed from the Internet because of a scene in which gangsters are shooting submachine guns at moviegoers through the screen of Grauman's Chinese Theatre. About a week after the shootings in Aurora, Warner officially confirmed that the film would be released on January 11, 2013 and on August 22nd (my birthday), the cast reunited in Los Angeles to completely re-shoot the main action sequence of the film, which now takes place in Chinatown.

All in all GANGSTER SQUAD is a great crime thriller that keeps the film noir flame alive in this new century. If you love crime films, then I think you'll enjoy this one! 4 out of 5 stars! Recommended!!


GANGSTER SQUAD is currently playing at select theaters nationwide, including at the Camera Cinemas here in the Bay Area. To view showtimes, visit their website at www.cameracinemas.com.

Thanks for reading, and enjoy the show!
Posted by Philip Castor at 7:51 PM