Welcome back to my movie binge weekend! So for film number three I went and saw the new horror film MAMA, which was produced by Guillermo del Toro (CRONOS, HELLBOY, PAN'S LAYBRENTH) and made by first-time director Andy Muschietti. The movie was based on his 2008 Spanish-language short film of the same name. Now after burned by the forgettable TEXAS CHAINSAW 3D, I was really in the mood to see a pure, unapologetic horror film. Well, I'm very happy to report that I finally did! 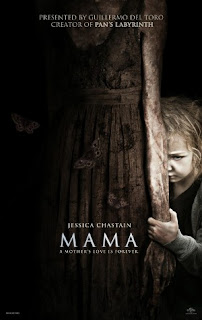 The film's official synopsis is as follows: Sisters Victoria (Megan Charpentier) and Lilly (Isabelle Nélisse), abandoned in the woods after losing both parents in tragic circumstances, are found after 5 years in horrible conditions: feral and dirty, they crawl on four legs and move like an animal. Everybody assumes that the girls have survived one their own in the woods, but when their uncle Lucas (Nikolaj Coster-Waldau) and aunt Annabel (Jessica Chastain), helped by a shady psychiatrist, take them in, the frightening truth comes out.

This is one of those rare horror films that feature character development all throughout the film. Here we have the amazing Jessica Chastain, who is currently Hollywood's "It" girl, as our main protagonist. Chastain (who has been getting rave reviews for her performance as Maya in ZERO DARK THIRTY) portrays Annabel in the beginning as the hard nosed, punk rock bassist who has no intentions on becoming a mom. However fate steps in and she now must come become a stepmother to her boyfriend's nieces. Once reluctant to take on the role, but by the end she risks her life to save them. It's a gradual growth of Annabel that is interesting because it takes a while for her to assume the parental role that she's been avoiding with a passion. It doesn't just happen over night, which makes it more believable.

Both Megan Charpentier and Isabelle Nélisse turn in outstanding performances as Victoria and Lilly, respectively. Now horror films featuring creepy children has been a staple in the genre for some time now. However, thanks to the huge wave of J-Horror films that hit the states in the past decade, it seemed that every horror film and remake featured a pale, long-haired scary girl or boy and it had gotten over saturated. But in this film, because it features some fine acting, we see the evolution of Victoria and Lilly, and how their relationship with Annabel and their "Mama" become strained as both sister begin to split apart from one another and become their own individual.

With Guillermo del Toro as executive producer, we see some of influence within the picture, but credit goes to director Andy Muschietti, who does a tremendous job with creating some genuine chills, scares, and screams. This is another factor that separates this film from the rest of the pack. It's a film that takes its sweet time to tell its story; it doesn't rush itself and cram too many unimportant facts or unnecessary characters that would make it drag. Sure, there are some cliched "scare jumps" but on a whole, the film works. It contains a great story, relatable characters, and relies on mood and atmosphere to scare you, not gore! This is the big difference that really made an impact on me. It scared me because it was scary, and spooky, and it made my spine tingle. A lot of filmmakers forget that no matter what kind of horror that can put on the screen, it cannot match out own imagination. This is one of those rare times that my imagination was allowed to portray my own fears on the screen. I can't even remember that last time I was allowed that luxury!

As I am writing this review, the film earned $28.1 million on its opening weekend and debuted at #1. Unlike TEXAS CHAINSAW 3D, I am very happy to have contributed to this film's gross. For all of you horror fans out there, this is a film that you can get behind.

MAMA is the best horror film to be released thus far in 2013! If you're like me and you prefer old school thrills and chills over senseless gore and bloodshed, then this is the film you've been waiting for!! 4 1/2 out of 5 stars!! Highly recommended!!


MAMA is currently playing at select theaters nationwide, including at the Camera Cinemas here in the Bay Area. To view showtimes, visit their website at www.cameracinemas.com.

Thanks for reading, and enjoy the show!
Posted by Philip Castor at 10:00 PM