The very first Alfred Hitchcock film I ever saw was THE BIRDS. I was about seven years old and it absolutely terrified me! After seeing that film, I was scared to go outside and play with my friends. Since that fateful introduction, I began to seek out more films by the man known as The Master of Suspense. I've been very fortunate to see many of his films, including some of his earlier films such as the silent film THE LODGER (1927), both the silent and "talkie" versions of BLACKMAIL (1929) as well as his classics like THE 39 STEPS (1935), REBECCA (1940), and NORTH BY NORTHWEST (1959). However it was his 1960 film PSYCHO that made a tremendous impact on me as well as the rest of the world. It is during the making of this masterpiece that director Sacha Gervasi's newest film HITCHCOCK is set. 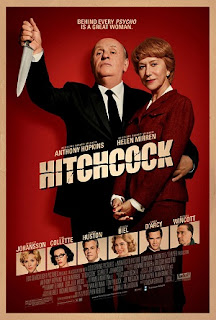 The film's synopsis is as follows: In 1959, Alfred Hitchcock and his wife, Alma, are at the top of their creative game as filmmakers amid disquieting insinuations about it being time to retire. To recapture his youth's artistic daring, Alfred decides his next film will adapt the lurid horror novel, Psycho, over everyone's misgivings. Unfortunately, as Alfred self-finances and labors on this film, Alma finally loses patience with his roving eye and controlling habits with his actresses. When an ambitious friend lures her to collaborate on a work of their own, the resulting marital tension colors Alfred's work even as the novel's inspiration haunts his dreams.

Based on Stephen Rebello's non-fiction book "Alfred Hitchcock and the Making of Psycho," Gervasi does an extraordinary job of creating the world of 1960 and handling it with great care and accuracy. He uses simple set ups and camera angles to tell his story without calling attention to it. The storytelling is very smooth and seamless; these ingredients are what makes a great film great. Nothing is more distracting than a series of unnecessary swoops and panning, which also takes the viewer out of the film. Here Gervasi employs the basics to tell his story and the results are very satisfying.

Believe it or not, this is only Gervasi's second feature. His first film was the fascinating and hilarious documentary ANVIL: THE STORY OF ANVIL. To go from making a documentary to directing HITCHCOCK is a major leap for this young filmmaker, and he is able to pull it off and make it look effortlessly. To direct major and talented actors and actress, have such lavish sets and props, and to have such a large budget to work with, Gervasi does an incredible job of telling the love story about a man and his wife, which is the real story that audiences will love to see.

Portraying Alfred Hitchcock is Academy Award winner Sir Anthony Hopkins, who channels the spirit of Master of Suspense himself in his performance. Cocky, arrogant, ill tempered, and yet there's a vulnerability in him. Hopkins showcases the massive pressure that Hitchcock was under while making his masterpiece. His obsession with the film leads him to converse with his imaginary friend; the infamous Ed Gein (Michael Wincott), who was the real life influence for the book and film, as well as other famous horror icons such as Leatherface from THE TEXAS CHAINSAW MASSACRE and Hannibal Lecter (which was one of Hopkins' best role ever) from THE SILENCE OF THE LAMBS. Wincott is a dead ringer for the insane Gein, and the two actors share some memorable screen time together.

We also learn of Hitchcock's other obsession: falling for his blonde leading ladies such as the star of PSYCHO Janet Leigh, portrayed here by the stunning Scarlett Johansson. Her interpretation of Mrs. Leigh is subtle: kind hearted, sweet, thoughtful, and wiling to anything to make her director happy. Johansson does let out a few screams here and there, but I would've liked to see more personality in her performance as Janet Leigh. She made her seem a little flat; just wished she brought more to the character.

But the film is all about the relationship between Hitchcock and his wife Alma Reville, who is brought to life by the talented Academy Award winning actress Helen Mirren. We learn that this great director had a great wife, who also lend her expertise in fleshing out scripts and can run a set just like any other male director. But her ability to write screenplays lures her old friend and colleague Whitfield Cook (Danny Huston) back into her life, which causes Hitchcock to suspect the worse. The on-screen chemistry between Hopkins and Mirren is electrifying. This reviewer found himself invested in the relationship, which is the focus of the film. The making of PSYCHO is the backdrop to this out of the ordinary love story, but the film does display the aspects of the production of the film from financing through casting, fighting with the ratings board and the limited release of the film in only two theaters nationally.

All in all HITCHCOCK is a wonderful piece of cinema that will entertain audiences everywhere this cold winter season! If you see this film playing in your city, take my advise and go see it! 4 1/2 out of 5 stars!! Highly recommended!!


HITCHCOCK is currently playing at select theaters nationwide, including at the Camera Cinemas here in the Bay Area. To view showtimes, visit their website at www.cameracinemas.com.

Thanks for reading, and enjoy the show!
Posted by Philip Castor at 8:37 PM